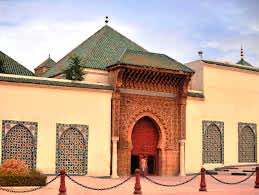 The shrine of Moulay Ismail is a beautiful historic landmark in the imperial city of Meknes where Moulay Ismail, Sultan of Morocco from 1672 to 1727, rest in peace alongside his wife and two of his sons. 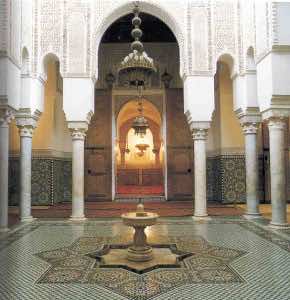 The tomb hall is a lavish contrast and showcase of the best of Moroccan craftsmanship that is open for non-Muslim. Although non-Muslim tourists may not approach the tomb itself, they can freely take shots.

“VirtualTourist members noted that despite the plain exterior, the interior is exquisitely decorated with sunny yellow walls in the three ornate courts, leading to the detailed woodwork and tiling of the anteroom,” according to Reuters.

Moulay Ismail Mausoleum Ranked 6 out of 48 things to do in Meknès by Lonely Planet travelers.

Restored in 1960 under the reign of Mohammed V, the mausoleum was built in 1703 by Ahmed Eddahbi, and, now, it stands as a remarkable historic landmark of the imperial city, in addition to many other fascinating historic landmarks, including the majestic gate of Bab Mansour which is one of the largest and most beautiful gates in the Arab world.

At the entrance of the shrine, there is a fascinating fountain with silver water pouring delicately on the edges, revealing a deep sense of the magnificence of Islamic architecture.