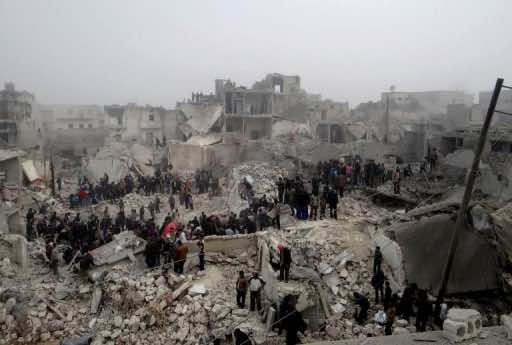 Insurgents fired mortar rounds at one of President Bashar al-Assad’s palaces in the Syrian capital on Tuesday, as the death toll mounted from a devastating missile strike on second city Aleppo.

The shelling, which was claimed by the rebel Free Syrian Army, came as dozens of Russians left the war-battered country on a plane sent by Moscow as its navy reportedly sent four warships to the Mediterranean for a larger evacuation.

The fresh violence came as the United Nations said more than four million people inside Syria are in desperate need of aid, up sharply from 2.5 million in September.

In Damascus, two mortar shells crashed into an area “near the southern wall of Tishreen palace” and two hospitals, causing damage but no casualties, state news agency SANA quoted an unnamed official as saying.

Little is known about Assad’s movements, and Tishreen is normally reserved for dignitaries, but it was the first time his regime has reported shells falling near a palace since the conflict flared 23 months ago.

The military council of the rebel Free Syrian Army announced on Facebook that “the Free Army has fired mortars at the Tishreen presidential palace” in west Damascus.

The shelling came a day after an apparent surface-to-surface missile attack flattened a residential area of Aleppo city, killing at least 31 people, the Syrian Observatory for Human Rights said on Tuesday.

Fourteen children and five women were among the dead, and the “toll is likely to rise as bodies are being retrieved from under the rubble,” it said, adding people were critically injured.

There were no planes overhead when the missile hit, according to residents, and the extent of the destruction indicated a surface-to-surface missile was likely used, Observatory director Rami Abdel Rahman told AFP.

Abu Hisham, an Aleppo-based citizen journalist, said “housing in the district was informally built. It took one surface-to-surface rocket to destroy an entire neighbourhood.”

Video footage and photographs shot by activists in Aleppo, scene of fierce fighting since the army launched an all-out assault to stop a rebel advance on the city on July 20, showed massive destruction in Jabal Badro.

Amateur film posted online by the anti-regime Aleppo Media Centre showed crowds of people gathering around hills of rubble and a bulldozer shovelling the debris as residents searched for relatives.

“I swear to God! I rescued a baby aged just two months from the rubble!” an unidentified man cried out in the video, whose authenticity AFP could not verify.

In the regime stronghold of Latakia, two Russian government planes carried humanitarian aid from Moscow to the port city, before taking back 99 Russians and other ex-Soviet citizens who wanted to leave on their return trip.

Moscow, which unlike other world powers still keeps close ties with the Assad regime, also announced it would host Syrian Foreign Minister Walid al-Muallem for talks on the crisis next week.

On February 13, a top Russian official said Syria’s opposition chief Moaz al-Khatib was also due in Moscow, though he did not specify when.

Observers are watching for any hints of Russia planning a full-scale evacuation of its citizens, which would be seen as a tacit admission from Moscow that Assad is doomed in his fight against rebels.

Meanwhile, hundreds of troops backed by military vehicles poured into Aleppo province, as rebels clashed with loyalists around Kwayris military airport as they pushed on with an assault to take control of Aleppo international airport.

At least 40 people were killed across Syrian on Tuesday, including five in a car bomb attack in Damascus province, the Observatory said.

In Geneva, UN Under-Secretary-General for Humanitarian Affairs and Emergency Relief Coordinator Valerie Amos described the situation as “devastating” as she announced that four million people inside Syrian needed aid.

“We are watching a humanitarian tragedy unfold before our eyes,” said Amos.

The United Nations says at least 70,000 people have been killed in the near two-year conflict, while the number of Syrians who have fled their homeland now tops 850,000.