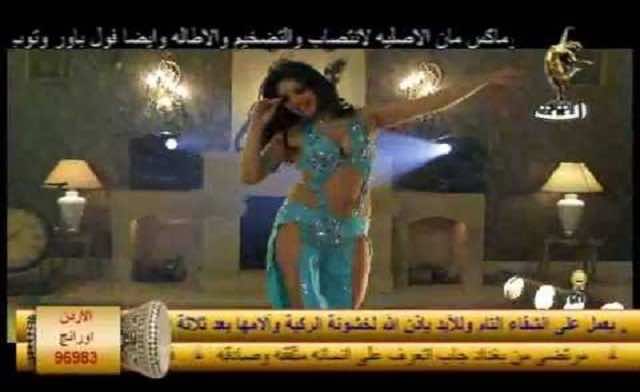 A widely-known private Egyptian TV channel, which showcases 24-hour rolling clips of belly-dancing, has been accused of airing ads that “arouse viewers,” and broadcasting illegally. An Egyptian court demanded its closure earlier this week.

Despite the ruling, the director, Baleegh Hamdy, says he will not give up broadcasting the al-Tet channel. It is now being aired from a different satellite.

In an interview with Al Arabiya Hamdy added that he is planning to launch a new channel called ‘Bom Tak’ and another channel on YouTube, also to showcase belly dancing.

Egypt’s administrative court on Saturday ordered the belly dancing channel to be taken off air for broadcasting without a license.

The channel was also accused of airing advertisements that “arouse viewers,” sell sexual-enhancement products and promote matchmaking, according to the court’s statement.

According to Hamdy, the court ruling was not based on accurate evidence. “The judge was supposed to check the facts present in the lawyer’s allegations.”

The lawyer, who filed a suit against al-Tet, accuses the channel of providing a platform for matchmaking, but “this is not true,” the director told Al Arabiya’s English website.

“The channel does not air ads for sexual products that aren’t licensed,” he added.

“There are more than 150 channels in Egypt airing the same ads for the same products … why are people picking on al-Tet?”

Hamdy said that al-Tet had a license and that it is not aired through the Nilesat provider, but aired on Noorsat, an Arab satellite provider headquartered in Bahrain.

The judge issued a court ruling that says the channel must be taken off the Nilesat, Hamdy said, quoting the court’s final statement.

He added that the Egyptian court should not have authority over the Bahrain-based satellite provider.

However, contrary to his expectations, the Noorsat provider in Bahrain shut down al-Tet after the Egyptian court ruling, Hamdy confirmed.

“Noorsat was supposed to respect the contract between us, but the channel is still aired anyway,” he said.

“When you watch a movie and a dancing scene comes on, you are forced to watch it to continue the movie,” he said.

“But people have remote controls and are free to choose to watch what they want.”

The internet and the Hotbird satellite also contain more sexually explicit content that are still permitted in Egypt, he added.

Al-Tet is among many channels that opened in Egypt after the 2011 uprising that toppled Hosni Mubarak. The channel’s owner is an American, said Hamdy.

By the beginning of 2013, al-Tet opened in the U.S. and in Canada, it will be up next month in Switzerland, according to the director.

In addition to launching a new channel for belly dancing called ‘Bom Tak’ and another on YouTube, Hamdy expressed his hopes to open a bouquet of channels dedicated to all kinds of dancing, including ballet and tango.

‘Islamists have nothing to do with it’

Despite the court ruling, Hamdy told Al Arabiya he respects the Egyptian judiciary system and denied that the Muslim Brotherhood had anything to do with the channel’s shutdown.

A spokesman for Egypt’s Muslim Brotherhood (MB) on Sunday told Al Arabiya that the movement has welcomed the court decision to shut down al-Tet.

“Like rotten food … there are rotten ideas being fed to our society,” he added. “The judicial system is one of the factors that can protect the society’s values, which both Muslims and Christians agree on.”

The spokesman denied that the MB had anything to do with the channel’s closure, saying it was a court ruling and the channel was not operating on a legal basis.