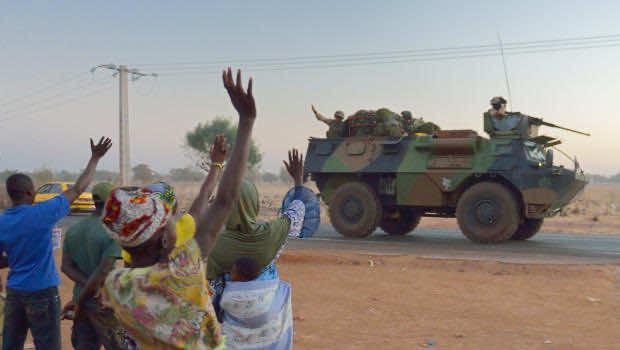 In the last two decades, Mali appeared among countries where democracy was respected, and where elections were held regularly in spite of the crisis linked to the north. The country was cited in the world as a reference to a successful democracy in Africa until recent events punctuated by a coup d’état and problems in the north showed to the world the dark side of the country.

Since the independence of Mali in 1960, the country experienced recently its third episode of a dark political history. In addition to the coups d’état in 1968 and 1991, Mali has been living another coup that occurred on March 22 last year when a group of soldiers overthrew the democratically elected president Amadou Toumani Touré. The putschists were headed by Captain Amadou H. Sanogo. They took over by taking advantage of the absolute laxity of the elected government in face of it management of the situation in the north.

The major cause of the crisis:

In its history, Mali has known four Tuareg rebellions: 1962-1963, 1990-1995, 2007-2009, and the current one. The current conflict concerns mainly: Timbuktu, Gao and Kidal which were attacked by multiple actors with diverging interests.

MNLA: the National Movement for the Liberation of Azawad.

The main objective of this group was to take control of the zone from Timbuktu, Gao and Kidal in order to create their own country that would be called Azawad. The group is composed mainly of Tuareg. Most of their soldiers were men from militias that had fought in the recent war on behalf of Gaddafi. They have a dual nationality (Mali and Libya). These soldiers were supposed to return to Libya after NATO operations would have ceased in order to combat the Libyan rebels National Transitional Council (NTC). Led by Saif al Islam, they crossed Algeria to come in Mali which was to be their rear base in reality. But Saif al Islam and other leaders of the group were captured in Niger and Mauritania. So automatically, the men of Saif al Islam, trained and over equipped with weapons, found themselves without orders. Therefore, they established connections with fellow Malians of the same factions to fight for the “liberation” of the so called “Azawad.”

Let’s face it, the existence of the “Azawad Republic” was a pipe dream!

The Republic of Azawad has no chance to exist in the boundaries it has chosen. The republic barely suits half of the population of the North. The north consists of only 10% of the Malian population. Tuaregs of the MNLA are a minority among a minority. And again, not all Tuareg feel concerned by the separatist project of the MNLA. In addition to subsoil resources, a small landlocked country with a small population cannot go far.

Algeria, which has problems with the Berbers in its south does not want a Tuareg state that may cause its destabilization by becoming a base for the GSPC (Algerian Salafist Group for Preaching and Combat) or any other ethnic subversive movement. Similarly, Mauritania, which has problems with FLAM (African Liberation Forces of Mauritania), does not intend to endorse a state Tuareg at the risk of being destabilized.

The Western powers, due to the potential of the region and perceived benefits, will not let pirates to settle and jeopardize any chance of development.

Finally, without the support of the majority of people living in the north to legitimize their actions, without human resources to boost the development of the area, without strategic partnerships to ensure the stability of this state, the “Republic of Azawad” is neither more nor less than a chimera that has caused the deaths of many victims and provoked a serious tear in the social fabric of Mali.

Other actors in the north:

Beside the MNLA, we have Al Qaeda in the Islamic Maghreb (AQIM). It has links with the Algerian Salafist Group for Preaching and Combat, who intended to make Mali a rear base to pressure Algeria and Mauritania.

Finally, we have MUJAO (Movement for Unity and Jihad in West Africa), a supposedly dissenting group from Ansar Dine. Ansar Dine is not a movement in itself, but another side of AQIM. The two structures are inextricably linked. Ansar Dine was created just for the sake of diversion.

But why in the north?

The security questions of the north of Mali can be explained by issues related to the geographical position and mineral resources.

We are all aware that MUJAO, Ansar Dine and AQIM do not embody the message of Islam they are fighting for. Everyone knows what is behind their mind in reality. Their wish is to see a lawless zone so that they can, in complicity with Colombian drug traffickers and Muslim fundamentalists, develop all possible kind of trafficking: drugs, cigarettes, weapons, hostages, etc. Therefore, Islam has become for them a kind of cover.

In addition, reserves of oil, gas, uranium and phosphate are detected in the north.

We know that the price of oil is no longer the same as it was a decade ago. Taoudéni, a locality in the north of Timbuktu, is valued highly today and an oil yard should start shortly.

When François Holland, the French President, decided to send to Mali French military forces to help fight against the Islamists advancing southwards, many Muslims around the world (Egypt, Kuwait, London, Istanbul and so on) took to the streets in protest against France’s military intervention. As a native Malian, when I have seen these protesters, I was shocked, but not surprised. The questions that I am still asking myself have still no answers: The word “jihad,” what does it really mean in Islam? Were these protesters aware of the violence that was targeting many poor victims in the north of Mali before any intervention? What about the multiple rapes, amputations and stonings to death caused by theses so called jihadists? Does the Islam of the prophet Muhammad (PBUH) order by force other Muslims to embrace Islam? Does Islam teach us to take hostages and ask ransom from countries of the victims? Does Islam teach us to kill innocents if ransom is not paid? Many more questions than answers.

As far as I know, the holy Quran teaches us that “if you kill an innocent, it is as if you have killed all human kind and vice versa.”

Islam is a peaceful religion that cultivates peace, love, forgiveness, honesty… So, what is the kind of religion that the jihadists want to establish?

For the sake of reminding, Islam has not been practiced in Mali recently. Nearly 95% of the population is Muslim. Moreover, the history of Timbuktu is well known. So, no need to go far into details concerning Islam and Mali. We, the people of Mali, do not care about what people think about this intervention. We have approved it. For us, it is necessary and justified.

What solutions for the future of Mali?

So now that Mali has nearly regained its territorial integrity, the future is full of more challenges. The conquest of the north was a tiny step among others. From now on, the government has to resolve the crisis in the South, especially in the capital Bamako. Political actors must leave right away their fruitless debate around the transition and put their personal interests in their pocket. Captain Amadou H. Sanogo (leader of the putschists) and his troops must understand that they are causing more trouble than solutions. They must stop killing each other in Bamako. It is shameful to see that “Green Berets” are fighting against “Red Berets.” How is that possible? Have they forgotten that at the same time there are foreign forces (French, Chadian, Niger, Nigerian) who are giving their life in the north to help us obtain our territorial integrity?

Moreover, the current Prime Minister, Diango Cissoko, must now create an exclusive dialog with all parts of the northern populations. It should indeed avoid the mistakes of the past: the dialogue should not only concern people who have taken up arms. It must involve all communities. Any other approach would provoke displeasure and uprising of others who would be discarded. The dialogue should also include other communities living in southern Mali. Indeed, the North is not the only part of Mali to experience developmental problems.

Another mistake to avoid is the amalgam. All Tuaregs are not supportive of the actions of the MNLA, let alone all the people of the North. On the contrary, many are hostile to any idea of independence or separatism. Some were forced to abandon their economic activity and all their possessions to seek refuge in neighboring countries or in Bamako. Some integrated Tuareg and Arab have demonstrated their loyalty to Mali. Dialogue is the preferred option for resolving the issues. It has the merit to avoid further heartbreak and loss of human lives.