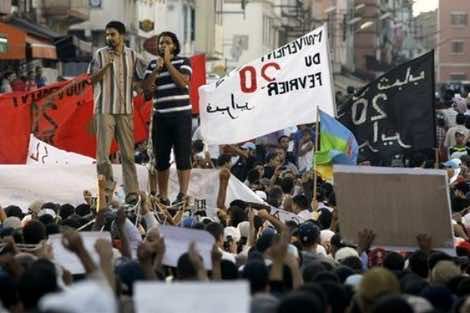 Some 800 protesters gathered in front of the Moroccan parliament on Wednesday, marking two years since the birth of the February 20 reform movement during the Arab Spring uprisings.

Carrying banners emblazoned with the words “Dignity” and “Freedom,” the crowd chanted for “the release of political prisoners,” an AFP correspondent said.

“All power and wealth for the people,” they shouted, before they were joined briefly by unemployed graduates who stage regular demonstrations in the city centre.

The rally then broke up into several groups on Mohammed V Avenue without incident.

“There are many people we haven’t seen for years. This is a new beginning,” said Khadija Ryadi, president of the Moroccan Association for Human Rights.

“The demands are still the same, meaning that there has not been any change” in response to the movement, he added.

In Casablanca, up to 300 activists took to the streets of the country’s economic hub calling for more democracy, justice reforms and protesting against the high cost of living, said another AFP reporter.

Tens of thousands of Moroccans took to the streets in the kingdom on February 20, 2011 after protests had already overthrown dictatorships in Tunisia and Egypt.

But since then, a new constitution and government have been put in place, and the number of people affiliated with the movement has dwindled.

Last year on the first anniversary, the February 20 movement managed to mobilise 1,000 people in Rabat, and rallies continued on the 20th of each month that followed, albeit with waning numbers.

Non-governmental organisations say there are dozens of political prisoners in the North African country where discontent remains high against the Islamist government.