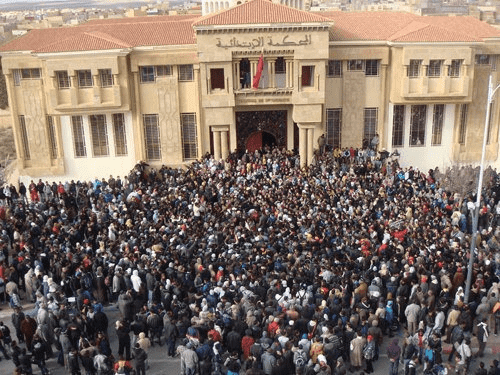 Moroccan Association for Human rights organized a sit in in front of the court of the first instance in Midelt, seeking justice for Hicham Himmi. The daily Alakhbar reported on its Thursday issue that the judicial official, accused of forcing a mechanic to kiss his feet, denied all the accusations, saying they were all rumors intended to undermine his reputation.

The daily added that Hicham Himmi, the reported victim of this incident, gave his testimony on Tuesday, along with other witnesses, to the Attorney-general to the court of appeal in Meknes.

The incident took place last Saturday in Midelt, 191 kilometers away from Meknes, when the vice-Attorney General made a young man kiss his right and left shoes, as a condition to forgive and release him.

Hisham received a client who wanted his car to be repainted. Busy working for other customers, he suggested for the client to come back two days later on the ground that he should wait for his turn. The person, who turned out to be a judicial official, raged at him and insulted him. Hicham added that he did not respond to his insults and threats, highlighting that he had no idea about the person’s social status. Instead, he only stated that he was an ordinary worker who was doing his duty.

After the judicial official left, two police men, wearing civilian clothes, invited him to the police station, located in the center of the city, saying  the conflict would be settled amicably. At the police station, Hicham was asked to show his identity card, but could not do that since he was not carrying it with him. The police told him he violated the law, as he was working while not holding his ID.

According to the 28-year-old, the arrival of the judicial official to the police station created a sense of uneasiness among police officers. Only then did he realize that his customer must be an important personality in the city. He later learned that the person who insulted and spat on him was the vice-President of Attorney General at the city’s court of first instance. The latter slapped the young mechanic and spat on him in front of everybody, including his employer. He added that he forced him to kiss both his right and left shoes, if he wanted to be forgiven. Only after he bowed to the judicial official’s humiliating demand, he was released.

Hicham said “he felt offended” and his psychological state of mind “is deteriorating.”

In a video published on YouTube, Hicham’s mother said her son was unjustly treated and forced to kiss the feet in front of men. “He accepted the dishonor, because he has got a child of two years old and sick parents,” the mother added.

On Monday, Hicham received an invitation from the police station. He was asked to submit a complaint against the judicial official. Supported by local Human rights activists, the young rejected the offer and preferred instead to submit his complaint to the Attorney General of the city.