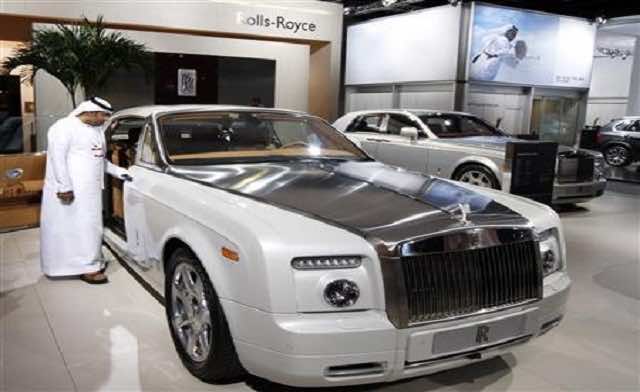 Luxury car maker Rolls Royce has created a bespoke collection of vehicles, exclusively for Abu Dhabi and Al Ain in the UAE, reported the country’s 7days newspaper on Thursday.

Designers of the new Rolls Royce Ghost collection took inspiration from Medieval Andalusia; the center of cultural exchange between Christianity and Islam in the middle ages.

The series of cars has been named the ‘Rolls Royce Ghost Andalusia Motif’ and will be available via an exclusive local dealership only.

Only five of the models bearing the special motif will be produced globally, making this car a true stamp of luxury.

Each of the Andalusia cars cost Dhs 1.57 million, despite the price tag three of the cars were sold while still in production, according to the Dubai based Gulf News.

Each vehicle features a unique tread plate and comes with a personalized message; “Andalusia motif – one of five.”

“Arabs have historically and culturally taken pride in their method of transport, which is why stallions, horses and camels remain a big part of Arab culture whether through racing or breeding,” said Kadhim al-Helli, Rolls Royce brand manager at Abu Dhabi Motors, reported Gulf News.

The process of planning and manufacturing a bespoke Rolls Royce is no easy feat, it takes roughly six months from conceptualization to completion. The mere design takes an average of 100 hours, including getting the car approved by those who commissioned it.

The Andalusia series was created at the Rolls Royce assembly plant in the Sussex Downs at Goodwood, UK.