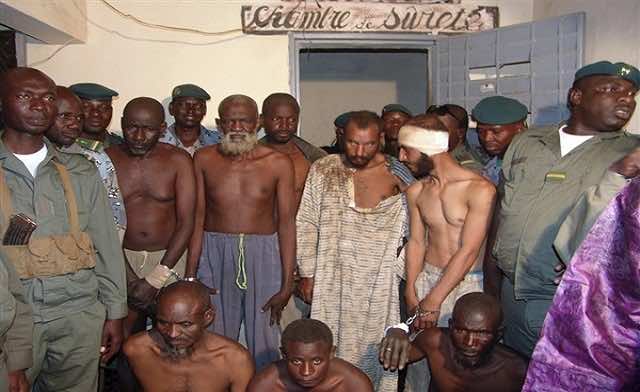 In northern Mali, the country’s army frequently turns to torture and murder against people suspected of backing armed Islamist groups, according to doctors, Malian and French troops and an AFP journalist.

The scale of the phenomenon is difficult to assess. Are such rights abuses the outcome of a deliberate counter-insurgency strategy in desert territory where people are more favorable to the Islamists than in the south, or is torture the work of a few hotheads?

Colonel Saliou Maiga heads the paramilitary police in Gao, 1,200 kilometers northeast of the capital Bamako. He has recorded several cases of torture and believes that “soldiers, if they are not controlled by their officers, can do what they like.”

Some of these troops, often badly led, resort to alcohol and even to drugs. And while the Islamists have committed many atrocities – including amputations and stoning to death – in the name of strict Sharia law, these soldiers appear to have equally little respect for human life.

Several soldiers fired on unarmed people who were close to a clash with a small group of Islamists on February 10 in the center of Gao, one of the three main towns in the north, an AFP journalist saw.

The Malian and French military consider that civilian casualties that day, who included at least three dead and 15 wounded, were mainly victims of Mali’s ramshackle army, which is due to receive military training in coming months by a European Union mission of 500 troops.

Allegations of abuses by the army have increased since the beginning of French military intervention in the divided country on January 11, according to the media and non-governmental organizations such as Human Rights Watch, Amnesty International and the International Federation for Human Rights, as well as representatives of Mali’s Arab and Tuareg communities.

Tuaregs and Arabs are sometimes known as “pale skins” by the majority black population. Their most prejudiced foes describe them as “all terrorists” and carry out, in some places, indiscriminate ethnic reprisals.

NGOs report “serious abuses,” including murders, in and around the western town of Biono, and a “series of summary executions” near the central towns of Mopti and Sevare, where there have also been reports of “sexual violence against women.” Witnesses also report similar actions near conflict zones.

An AFP journalist saw four “pale skins” in Gao and Timbuktu, 900 kilometers northeast of Bamako, who bore marks of torture, such as cigarette burns, traces of electric shock treatment and the use of acid, broken bones, bruises, bullet wounds and signs of strangulation, as well as sexual abuse.

In one town, which cannot be named at the request of the victims, who also asked for anonymity, one man said that after he was beaten up and burned with cigarettes, soldiers poured acid down his nostrils.

“It’s perhaps because I am Tamashek (Tuareg), I don’t see any other reason,” he told AFP.

“I know that he is not an Islamist,” said his doctor, who added that the victim was gravely ill because “the acid will lead to a shrinking of the esophagus, perhaps cancer.”

Elsewhere, a young pale-skinned woman lay on her sickbed with broken bones and several bullets in her body. She told AFP that soldiers had assaulted her. Her doctor said she had also been raped.

In Timbuktu, journalists of the US news agency Associated Press said that they had found two Arabs buried in the sand, close to the town. The family of one of the victims said he had been arrested by Malian soldiers two weeks earlier.

Since then, Malian troops several times went to see the AP correspondents, according to a French military source and a journalist. These sources said the soldiers made no physical threats, but used strong psychological pressure. The news agency has declined to comment.

In Gao and Timbuktu, several French soldiers expressed disgust at what they had seen done by their Malian counterparts. “They treat their prisoners like dogs,” one said.

“The hierarchy (of the French army) seemed to be worried, but decisions will be taken in Paris,” said another.

The spokesman for the French military operation in Bamako, Lieutenant-Colonel Emmanuel Dosseur, declined to comment on the matter.