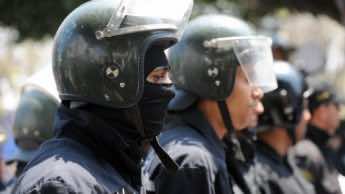 Two Tunisian police were wounded in an exchange of gunfire with presumed Salafists on Thursday in Sidi Bouzid, the cradle of the country’s uprising two years ago, a medical source said.

The shooting took place when police after a chase cornered four armed men in a mosque in the centre of the town, which is a stronghold of the ultra-conservative Muslim group blamed for unrest around the country.

An interior ministry spokesman said only one policeman had been hurt.

An AFP correspondent said that earlier, the four men had refused to stop their car at a checkpoint in Sabbala, a town north of Sidi Bouzid. Instead, they forced their way through, exchanging fire with police in an incident that caused no casualties.