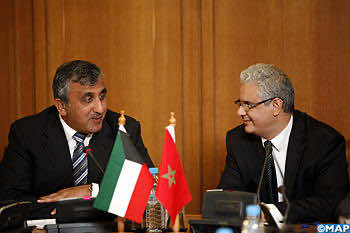 A framework agreement to manage a 1.25 billion dollar-grant by Kuwait was signed, Thursday in Rabat, by Economy Minister Nizar Baraka and managing director of the Kuwaiti Fund For Arab Economic Development Abdelwahab Ahmad Al Badr.

Speaking on this occasion, Baraka said this donation is part of the strategic partnership between Morocco and the countries of the Gulf Cooperation Council (GCC), which has set the objective of promoting Morocco’s development.

The money will be used to finance a number of strategic development programs, particularly in relation with education, health, housing, agriculture, dams and ports, Baraka said.

Ahmad Al Badr said that the management of this grant will span five years as of 2012, in coordination with the Moroccan side, noting that, up to date, 37 agreements between Morocco and the Kuwaiti Fund were implemented for an amount of 1.3 billion dollars.

The signing ceremony was attended by members of the government and Kuwait’s ambassador to Morocco.