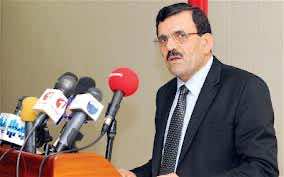 “He is the official candidate of Ennahda for prime minister,” said Mouadh Ghannouchi, son of Ennahda chief Rached Ghannouchi.

The party leader and Larayedh, 57, will now meet with President Moncef Marzouki, who is expected to task the interior minister with forming a new government.

They posed for photographers outside the Ghannouchi family residence, but made no statements.

Earlier, Radio Mosaique FM and Shems-FM, as well as an Ennahda source, said Larayedh was chosen by the party’s Shura Council overnight.

Larayedh, who was imprisoned and tortured under the regime of Zine El Abidine Ben Ali, has been interior minister since the dictator was ousted in 2011.

A moderate member of the party, he is seen as a man of dialogue.

Jebali resigned on Tuesday after his plan to form a non-partisan government, announced in the wake of public outrage over the assassination of leftist politician and government critic Chokri Belaid, was rejected by his own party.