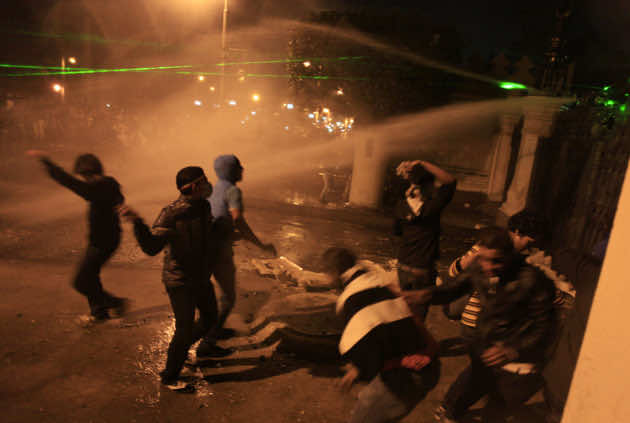 Hanan Attia says she can no longer leave her home on Fridays in the Egyptian capital, where bloody weekly protests and insecurity have left many anxious families dreading the weekend.

“It’s no longer a day of rest, but one of fear and anxiety,” Attia told AFP.

Since November, when President Mohamed Morsi issued a controversial decree that widened his powers and pushed through a contested Islamist-drafted constitution, the country has been deeply divided.

On almost every Friday — the first day of the Egyptian weekend — since the decree, opposition groups have called protests against Morsi and his powerful Muslim Brotherhood, which have regularly degenerated into violence.

Fridays, traditionally a day of family gatherings and outings, has now become synonymous with violence, blood and even death, many say.

In January, the second anniversary of the uprising that toppled Hosni Mubarak and brought Morsi to power, triggered the deadliest confrontations between police and protesters in which more than 60 people were killed.

“I’m not able to travel to (the northern city of) Alexandria to see my family because I’m scared of the protests and the road blocks,” Attia, the mother of three said. “The day starts off with demonstrations and ends up with shooting, molotov cocktails, violence and blood.”

Even if the most violent confrontations are confined to specific areas such as near Tahrir Square or the presidential palace, the rise in insecurity across the country including robberies, carjackings and random shootings have created widespread anxiety in a city once known for its safety despite its large size and socio-economic inequalities.

She said her husband is extremely nervous about letting their children go out “even though it’s our only day off.”

At a cinema theatre in central Cairo, manager Ibrahim Fawzi said Friday ticket sales had dropped by 50 percent and “families are almost entirely absent”, reporting similar figures in all branches of the theatre across the country.

Near the presidential palace in the upscale neighbourhood of Heliopolis — the scene of violent protests between protesters and security forces since December — shops have had to take extra safety measures.

“We are in the heart of the events,” said Mohammed Ihsan, 33, who manages a sports shop in Heliopolis, as he points to metal sheets placed in front of the shop’s glass windows.

Opposite the presidential palace, the Heliopolis Club, a social and sports club established over 100 years ago, was forced to raise its walls to avoid the stones and the petrol bombs from the nearby clashes.

The violence is not limited to the capital with reports of non-activists getting caught up in it while running errands.

One man was killed when he was run over by a speeding car in the Nile Delta city of Mahalla during clashes. Another who was out buying medicine near the scene of violence was arrested and later died in his police cell, their families told rights groups.

The tension has had a direct hit on businesses, already suffering from a crippling economic crisis and counting on weekend revenues.

“Even with all the discounts on offer, few people come and we have to close the shop early,” said Ahmed al-Sherif who owns a clothes shop near Cairo’s Tahrir Square, where two luxury hotels were also recently damaged during the confrontations between police and protesters.

“Thursday and Friday were the best days for us,” said Saber Hussein who manages a women’s fashion store in Heliopolis. “But now on Fridays, sales have dropped by more than half.”

“Those who do end up coming on Friday are nervous and want to finish the transaction as quickly as possible,” said Hussein.