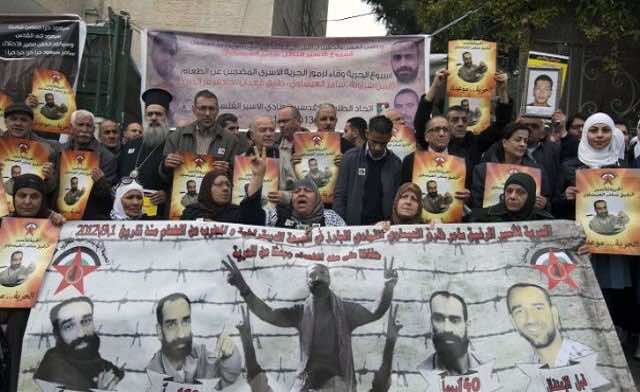 About 100 Palestinians were wounded on Friday following clashes between Israeli security forces and Palestinian demonstrators in the West Bank demanding the release of huger-strike prisoners, the Palestinian Red Crescent said.

The Red Crescent’s Mohammed Ayyad said that 94 Palestinians were wounded; two of them by live bullets, as police responded to stone-throwing demonstrators with tear gas, stun grenades and gunfire.

More than half of those hurt were outside the Ofer military prison near the West Bank city of Ramallah, where hundreds of Palestinians are being held, Ayyad said.

Thousands of Palestinians protested across the West Bank, including some 2,000 in northern city of Nablus, where clashes erupted between dozens of youths and Israeli soldiers, close to the Huwara checkpoint, according to witnesses.

Another 2,000 protesters, some waving Palestinian flags, demonstrated at the Jalameh military checkpoint, outside the northern West Bank city of Jenin, where they clashed with Israeli soldiers, who fired tear gas and arrested 17 of them.

He said five Palestinians were arrested in the Issawiyeh district of the city, including four minors.

At a demonstration of solidarity with hunger-striking prisoners outside the Ofer prison, hundreds of Palestinian youths clashed with Israeli soldiers, an AFP photographer reported.

In Hebron to the south, nearly 400 people marched in support of the prisoners and to demand the reopening of a road closed to Palestinians since the 1994 massacre of 29 Palestinians by a Jewish settler.

Israeli soldiers used stun grenades and tear gas to disperse them, and detained a photographer from the official Palestinian news agency Wafa, with four people wounded by live bullets, according to Palestinian security sources.

The fate of Palestinian prisoners, and in particular four who have been fasting on and off for months to demand their freedoms, has sparked protests across the Palestinian territories since the start of February and raised international concern.

Qaadan and Ezzedine, accused of participating in activities of the Islamic Jihad militant group, have been imprisoned without trial since November.

Sharawrna, an alleged Hamas activist involved in attacks on Israelis was, like the fourth hunger striker Samer Issawi, freed in the 2011 swap for Israeli soldier Gilad Shalit and later rearrested.

“We moved them (to hospitals) because we want them examined to see if they are really alright,” said Israel Prisons Service spokeswoman Sivan Weizman, adding that she expected them to stay in hospitals until Saturday.

On Tuesday, United Nations chief Ban Ki-moon said he was “deeply concerned” about the hunger strikers, singling out the case of Issawi, who was handed an eight-month jail term Thursday for violating the terms of his release from a previous sentence.

Palestinian political analyst Ray Hanania said that Issawi broke a new record in hunger strikes for remaining without food for more than 200 days.