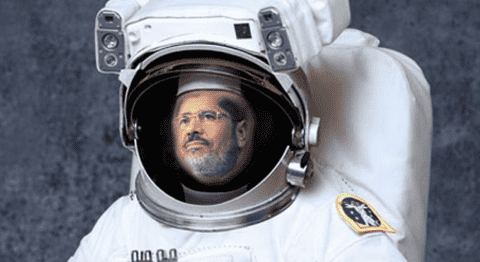 Opponents of Egypt’s President Mohamed Morsi are voting to send him where no Islamist leader has gone before: outer space.  Morsi on Saturday was leading the field in Egypt in an online contest sponsored by deodorant makers Axe to send a lucky few on a shuttle operated by space tourism company Space Expedition Corp.

Egypt’s opposition movement April 6 entered Morsi into the competition. “With God’s help, and under His care, Morsi will soon be launched to the moon,” the group said on its Facebook page, along with a picture of the president in a spacesuit.

The presidency has not responded to the campaign on behalf of the former engineer and self-professed “Planet of the Apes” fan. But his opponents have enthusiastically embraced the possibility. “I just voted for Morsi to go to space. Proudest moment in voting history,” one of them wrote on Twitter.

Trailing far behind Morsi’s almost 22,000 votes, Egyptian mountain climber Omar Samra said he selected Morsi even though he himself dreamed of going into space.

“That awkward moment when you’re confused between fulfilling your dream to go to space and sending your president into orbit,” he wrote on Twitter.

Twenty-two winners from around the world will be trained for the trip at a camp in Florida, United States, before they board the shuttle to take them 103 kilometres (64 miles) above the Earth.