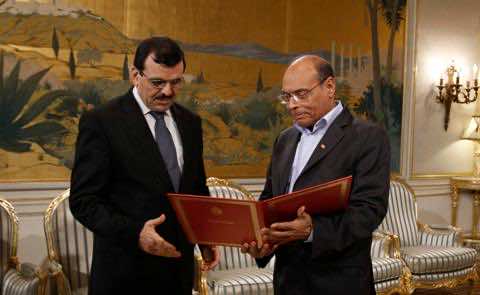 Tunisia’s prime minister-designate, Ali Larayedh, was to start work Saturday on forming a new government after his predecessor and fellow Islamist Hamadi Jebali stepped down in the face of a political deadlock.

Rached Ghannouchi, who heads the two men’s Islamist party Ennahda, said the efforts were focused on enlarging the three-member ruling coalition to add another two parties.

The Ennahda leader said on Friday night that the aim was to bring Wafa, which is made of CPR dissidents, and independent Islamists of the Freedom and Dignity group into the government.

But a sticking point remains the attribution of the key posts of interior, justice and foreign ministers — portfolios which the government’s opponents want to go to independents, Ghannouchi acknowledged.

“The questions of neutrality… and the candidacy of members of the new government have not yet been resolved,” he told the official news agency TAP. Larayedh, the interior minister tapped by Marzouki to become the next prime minister, pledged on Friday to form a cabinet representing all Tunisians.

“We are going to enter the phase of forming a new government that will be for all Tunisian men and women, taking into account the fact that men and women have equal rights and responsibilities,” he said.

Larayedh “will have 15 days to form a new government and present its plan” to the head of state, Marzouki’s spokesman said, adding that the president urged him to do so “as quickly as possible because the country cannot wait any longer.”

Ennahda had put forward Larayedh’s name after its consultative council selected him on Thursday night.

Jebali resigned on Tuesday after his plan to form a non-partisan government, announced in the wake of public outrage over the murder of leftist politician and Islamist critic Chokri Belaid, was rejected by Ennahda. The killing sparked deadly street protests and strikes, which Jebali attempted to defuse by announcing his plan for a cabinet of technocrats to lead Tunisia into early elections.

Jebali’s plan, while largely supported by the opposition, had been bitterly opposed by Ennahda hardliners, represented by its veteran leader Ghannouchi, who refuse to give up key portfolios and insist on the party’s electoral supremacy.