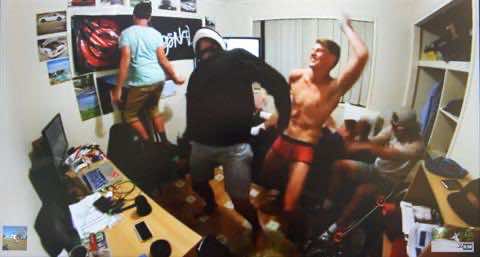 Egyptian police said Saturday they have arrested four students who filmed themselves publicly dancing in their underwear, as more people around the world emulate a viral dance craze called the “Harlem Shake.”

The four pharmaceutical students shocked residents of a middle class Cairo neighborhood when they removed most of their clothes and videotaped themselves performing the pelvis-thrusting dance, a police official said.

The hostile audience tried to assault the students, who are accused of committing “a scandalous act,” the official added.

Some Egyptians have posted videos of themselves on Youtube doing the “Harlem Shake” in front of the pyramids. One of them, dressed in white underwear and a bow tie, dances while riding a camel.

The dance craze was sparked by a group of Australian teenagers who uploaded the 31-second clip “The Harlem Shake v1 (TSCS original)” onto YouTube earlier this month. It has since been viewed almost 16 million times.