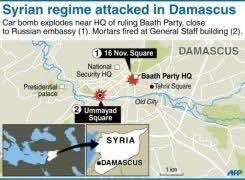 The opposition National Coalition said it is pulling out of some international meetings to protest silence over the slaughter of Syrians, as missiles killed at least 29 in second city Aleppo.

The announcement late Friday came after the Coalition had said it would form a government to run “liberated areas” of Syria, and as condemnation mounted against devastating attacks in Damascus that left about 100 people dead a day earlier.

The umbrella opposition group said it would not attend meetings in Italy, Russia and the United States to protest against the “shameful” lack of international condemnation of “crimes committed against the Syrian people”.

It had been due to attend a Friends of Syria meeting in Rome on Thursday at which US Secretary of State John Kerry is expected. Coalition chief Ahmed Moaz al-Khatib had also been invited to Moscow.

“The international silence on the crimes committed every day against our people amounts to participating in two years of killings,” said a National Coalition statement.

“We hold the Russian leaders in particular ethically and politically responsible because they continue to support the (Damascus) regime with weapons.”

Earlier, after a meeting in Cairo, spokesman Walid al-Bunni had announced plans for a government for “liberated areas” that he said he hoped would be based inside northern Syria.

Its composition and “prime minister” would be chosen at a meeting on March 2, he added, with Coalition members saying the gathering would be held in Istanbul.

The group had been discussing a proposal by its chairman Khatib to hold direct talks with President Bashar al-Assad’s regime.

It has refused to meet Assad himself, or the security command, with Khatib saying the offer was only to those without “blood on their hands”.

The Arab League and the United States, vocal critics of Assad’s regime, have welcomed the initiative, as have Iran and Russia, both close to the Damascus regime.

Peace envoy Lakhdar Brahimi said Thursday’s attack in Damascus had left about 100 people dead — substantially more than a previous toll of 61 — and wounded another 250.

Describing it as a “war crime”, the UN-Arab League envoy added that “nothing could justify such horrible actions that amount to war crimes under international law.”

European Union foreign policy chief Catherine Ashton said “nothing can justify an act of such brutality that killed so many people, mostly civilians, including children.”

Both the regime and opposition have blamed “terrorists” for the attack near the entrance of the ruling Baath party’s main offices.

Another 22 people were killed in a triple bombing targeting security headquarters in the northern Damascus district of the same day, including 19 members of the security forces, said the Syrian Observatory for Human Rights.

In the northern city of Aleppo, Observatory director Rami Abdel Rahman said at least 29 people had been killed and 150 wounded when three missiles hit Tariq al-Bab district on Friday.

And elsewhere in Aleppo, shelling on Maadi district caused a building to collapse, the Observatory said, killing an unknown number of people.

In the province, rebels fought troops on Saturday near Aleppo international airport and Nayrab air base, southeast of the city, the Observatory said.

The army’s use of surface-to-surface missiles is part of a bid to advance on the city, swathes of which have fallen into rebel hands since mid-2012, Abdel Raham said.

“The army has been trying for weeks to come closer to Aleppo via its eastern entrance, in order to assault it. Elite troops are being sent… but so far the army has been unsuccessful,” he told AFP.

A security official in Damascus said late last year that such missiles were a Syrian-made version of Scuds, while NATO has reported the use of ballistic missiles in the country.

The Observatory said at least 110 people were killed nationwide on Friday.

The United Nations says at least 70,000 people have been killed since the uprising broke out on March 15, 2011.