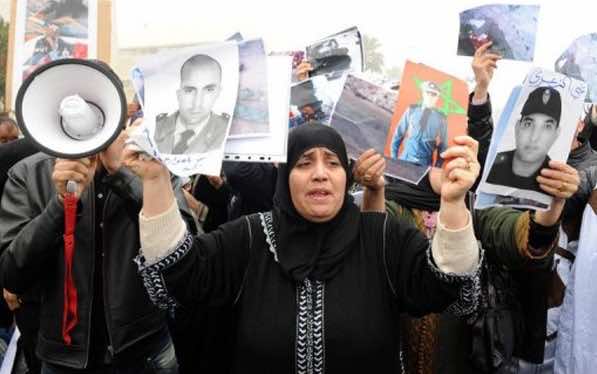 For almost three decades, Morocco has been battling full legal international recognition of its southern territories known as Western Sahara.  On 9 October 2010, separatists elements erected Gdeim Izik camp, few miles outside the main city Laayoun, as a form of protest against the Moroccan government. On November 8th of the same year, Moroccan security forces intervened to dismantle the camp.  By the time it was all over, 11 members of the security forces were killed, and about 70 people were injured according to Moroccan authorities. Many people were  arrested after this tragic event.

25 defendants faced trial and sentences were handed down on Sunday February 17th.  Due to the sensitivity of the trial, about 60 international observers were permitted to follow the proceedings. A former Washington Post staff writer, Alison Lake, was among the attendees.

Alison Lake is a freelance writer and editor, and a former staff writer at The Washington Post whose work has appeared in numerous magazines and newspapers. She has written recently on Western Sahara and terrorism in North Africa for the Post and Foreign Policy magazine. She previously worked as a writer and editor for a Washington-area Islamic think tank, and consulted for several public policy organizations. Alison has written two books, one of them is Colonial Rosary, which is carried by over two-hundred university libraries.

In what capacity did you attend the Gdeim Izik trial?

I attended the trial as a media observer, and spent 3 days in the military tribunal courtroom, including the last day the judge delivered his verdicts at 1 am Sunday February 17.

How many defendants were there and what was the range of charges?

There were a total of 24 defendants, including, I believe, one who was tried in absentia and who is still on the run. Most of the accused received 20-30 year sentences, in addition to some life sentences and 2-year sentences of time already served. Charges included assaults on military personnel with intent to kill, murder, and desecration of corpses and causing disorder.

The Moroccan government had promised full transparency during the entire trial. To what degree do you think that promise was fulfilled?

I am still investigating this piece of the puzzle for an article that will publish next week, but I do think Morocco has made every effort to document the process and be as open as possible. Numerous family visits were recorded, as well as documentation of many medical examinations to address the defendants’ claims of torture while under investigation.

Some argue that the trial and the sentencing concluded way too fast and given that it was conducted by a military court, justice and fairness are a near-impossibility. Your comments?

The Moroccan side states that since more than two years were taken to build the case and approach it in a fair and clear manner, the trial was not too fast. From my perspective I was astonished that a case of this complexity could be resolved so quickly. Many observers stated that the trial should have been held in a civil court to give a fair trial to the defendants, who are civilians, but the crimes were mostly committed against military personnel. I am told by Moroccan attorneys that Moroccan law requires, in cases where victims are military, that they be tried by a military tribunal. Certainly from a visual standpoint, the court was heavy on the military side. We were surrounded on all sides by gendarmes and special forces guarding the courtroom. On the other hand, the defendants were not handcuffed and were allowed to wear their traditional Sahraoui clothing.

How was the court’s treatment of the defendants during the trial and the sentencing?

The latitude allowed to the defendants during the trial was one of the most striking aspects of the process, for me. I cannot imagine being in a criminal court in the United States or Morocco and witnessing defendants on trial for murder who are allowed to behave as they were allowed last week: the men entered the courtroom without handcuffs; got up and approached the bench sometimes without formal request and were allowed to talk; joked with each other and frequently turned around to smile at family and sneer at the audience, and most of all, constantly chant slogans and shout in the courtroom upon entry and exit. They also had long lunch breaks and could get up out of their seats any time to get water or restroom breaks. What seems unprecedented in Morocco perhaps is the length of time the judge allowed them to talk and present their cases. The defendants were given their time to speak, not only through their lawyers, and from what I saw, the judge treated them with extreme respect and open ears. While this was happening, protests happened day and night outside the courtroom, with supporters of the victims’ families on the one side and pro-Saharan independence demonstrators on the other.

What kind of legal representation did the defendants have?

11 lawyers represented 24 defendants. Two lawyers came from Moroccan human rights organizations and the rest were funded by the defendants’ families or international organizations, or served as volunteers. Some of the lawyers were evidently sympathetic to the pro-Sahraoui independence ideology of the accused and even originated from the same region in the South, as evidenced by their accents.

Do you think that the defendants received a fair trial, and that the punishment fit the crime?

The punishments, in my opinion, appear to fit the crimes. From what I hear, many Moroccans are pleased that their government has demonstrated it will not tolerate such violence in the kingdom and its (de facto-ruled) region of Western Sahara. From a security standpoint, the verdicts are reassuring to the Moroccan people. On the other hand, I talked to observers and lawyers who also believe the convicts are likely to be pardoned after a period of time and receive shortened sentences. From the perspective of the victims’ families, many present at the trial were happy the defendants received the sentences they did, but families are likely to pursue their cases in civil court as well for damages.

Was there any talk of appeal?

As each convict made his way out of the court, the prosecutor told him he would have one week to make an appeal. The defense lawyers made clear in their arguments that they believed the trial was unfair and that appeals would be pursued.

What reactions and impressions did you see from international observers and monitors throughout the trial?

Most observers I spoke with were happy with the tone and approach of the trial and believed that Morocco followed its obligations as signatory to many human rights treaties. Interestingly, media representation was overwhelmingly and disproportionately Spanish. Spain evidently had great interest in the outcome of this trial. It would have been nice to see more Arab and Western media in the courtroom as well.

If similar events were to have taken place in the United States, how different the handling of trail would be ?

I cannot imagine a trial of this complexity being resolved so quickly in a courtroom in any country. However, from an American perspective, we see how our Guantanamo detainees have sat in prison for years and many without due process. In this case there was plenty of evidence to implicate the defendants, which moved the process along.  We saw an ample number of photos and other evidence such as cell phones and walkie-talkies, as well as statements made by the detainees, that made the case fairly solid. For Morocco, this trial is a momentous event. The country aimed to show the international community it could conduct a fair and transparent trial, as well as demonstrate respect for free speech by allowing constant demonstrations and protests to take place outside of the courtroom. The November 2010 riots and murder in Laayoune that prompted this trial demonstrate to many people that the political status quo of the Western Sahara is untenable. Continued stalemate over the territory’s status is harmful to Morocco’s security and stability as well as for the people living there.

A video from the Gdim Izik incident contains graphic images: