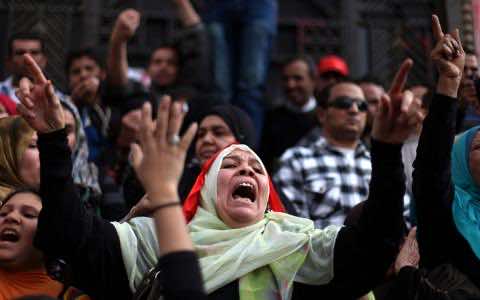 Protesters on Sunday closed the doors to Cairo’s main administrative building as part of a growing campaign of civil disobedience around the country, employees and witnesses said.

A group of protesters closed the doors of the Mugamma, a massive labyrinth of bureaucratic offices on the edge of Tahrir Square, leaving only a side exit for employees to leave, they said.

Thousands are employed at the Mugamma, which houses passport offices, tax offices and various other government agencies.

“A small group of young people closed the main doors of the building and they are not letting anyone in,” one employee told AFP from inside the building.

The protesters “did not enter the building,” the employee said.

“They have left a door open and said employees who finish their shift must leave and that they won’t let anyone in,” witnesses said.

The Mugamma has been closed before, most recently during protests marking two years since the ouster of president Hosni Mubarak in a popular uprising.

The move to close the building comes amid calls for strikes and civil disobedience against what protesters say is Islamist President Mohamed Morsi’s failure to deliver the goals of the uprising.

A general strike in the canal city of Port Said entered its second week on Sunday, with most shops and factories closed down.