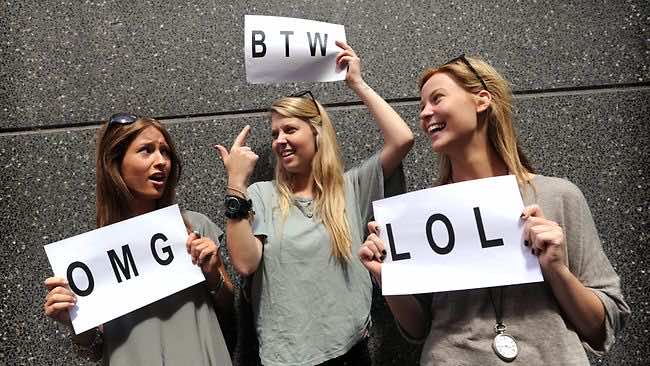 ‘Lol’ is how a friend of mine responded to a joke I told him while sitting in a coffee. It was doubtlessly not the first time I heard him using that ‘chat acronym’, which had first surfaced as an expression from what we are now accustomed to dubbing ‘chat language’.  He was not even the first among my friends to make usage of chat slang in face-to-face interactions. I myself occur to deliberately insert a chat acronym or two, or an entire expression, at times, in my customary conversations with friends, or with those I believe can decrypt those unusual linguistic combinations taken out of their ‘native sphere’: internet.

Apparently, internet seems to give us back the language we once accorded it for the sake of making it operational—and a language that was mainly conditioned by its social context—but in the form of a language that seems to have undergone series of configurations while in use in its ‘digital context’. ‘I am laughing out loud’ is the input of the now so notorious acronym ‘lol’, an output that appears to increasingly substitute the original expression—the input—in our human environment. ‘MDR’ is “lol’s counterpart in the French language; the French acronym seems to have attained advanced stages in its process of substituting its original input form ‘Je suis mort(e) de rire’ (I am dying of laughter, in English).

Whether we should stand cautious as to the encroachment of chat language within the proprieties of our own ‘standard language’, as some favor calling it, is nothing but a banal question that diverts out attention from what might give birth to something coterminous to African American Vernacular English (AAVE). This latter in its embryonic phase was deemed a jeopardy increasingly endangering the proprieties of Standard English. Perhaps unexpectedly, AAVE, since its inception, has remained the dialect used almost predominantly by its native community. Though some speakers of what is dubbed ‘white English’, or those who are not representative of the African American population, have increasingly become fond of AAVE, such tendency does not forcibly represent a menace to Standard English.

What makes Standard English standard, in the first place, and what had granted one the legitimacy to label AAVE a non-standard dialect, and on what firm bases? On what bases are we to label chat language as substandard or threatening to our standard language?

Just as AAVE managed to find a merited seat within the versatile linguistic mesh of the U.S., one should not be surprised to see chat language, perhaps in the near future, taking a more concrete shape among our so-called ‘standard languages and dialects’; neither will it be astounding to have ‘linguistic conservatives’ leveling abrasive attacks at the ‘internet dialect’ under the same arguments advanced by former antagonists to the AAVE.

As long as those who find themselves disposed to frequently using chat language in face-to-face conversation remain reverential towards the demarcations embedded in answers to contextual questions such as ‘when’, ‘where’ and ‘who’, one should not worry much about the future of his or her native language or dialect. A thing that most of us may not consider speculating is that chat language might extend the repertory of expressions—a thing that is already ongoing—that we already have, thus offering us new possibilities of saying the same thing, differently, and perhaps more efficiently. With that coming true, internet chat might go beyond that to help preserve dialects and languages with small speech communities by injecting a breath of actuality in the veins of those languages. What else could one ask for besides the enrichment of one’s language?

The world has always stood with ‘widely open arms’ to ‘newborns’, be they new human lives, new cultures, new languages, new religions, new ideas, new ideologies, and so forth. Why would a new language or dialect, be it standard or substandard—knowing that they are means that will unquestionably remain dependent on humans’ existence—be perceived a jeopardy to human themselves? Is not ‘internet language’ a human invention itself?