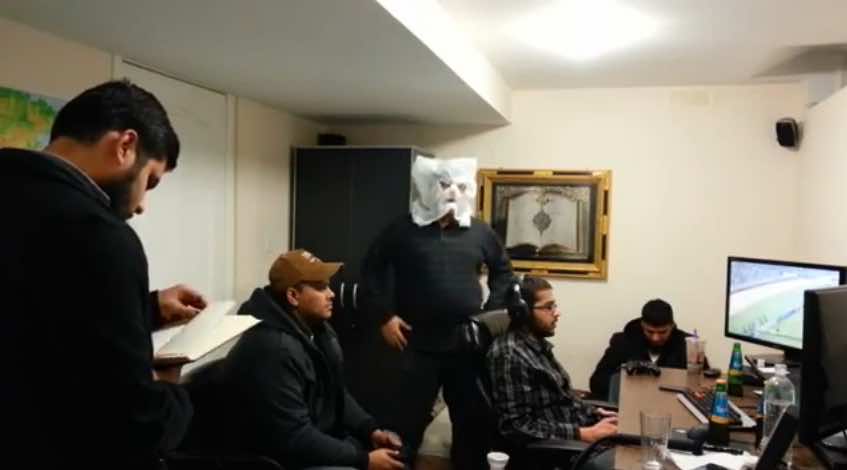 In a video recently uploaded to YouTube, entitled “Harlem Shake – The Muslim Version,” a group of apparently Muslim men exposed quite an exceptional response to the epidemic, pop-culture phenomenon, ‘the Harlem Shake,’ which has been speedily propagating on the net.

In a small room, four men look preoccupied, while the fifth man is performing the introductory, weird moves that are typical of almost all the Harlem Shake videos. Two of the five men appear to be reading from the Quran, while the other two seem to stare at a computer screen, unmindful of the fifth man, who is performing the peculiar dance, with a white paper bag on his head.

To the dismay of those who might expect the second segment of the video to be expectedly a dramatization of the weird and random moves typical of the Harlem Dance, the most exciting moment of the Harlem Shake was replaced in this Muslim version by a scene wherein all of the five men perform a collective prayer, dressed in a typical Muslim dress. Right after that, a phrase reads ‘Astaghfirullah (I seek forgiveness from God, in English)…Stop the Haram Shake.’

The majority of reactions to this video were positive, almost predominantly from adherents to the Muslim faith. However, harsh and unsavory responses were also noted from the side of non-Muslims, who fired abrasive and derogatory comments at the makers of the video. Moreover, they took their reactions beyond the context of the video to generate sweeping generalizations and prejudices about Islam and Muslims.

In what might look as a brave and fair response to the phenomenon of the Harlem Shake, embodied in the video described above, both the makers of the video and those who responded positively to it appear to ignore the ironic, almost ridicule fact, that they are still engaging on a ‘free unconscious advertisement’ of the pop-culture phenomenon, the Harlem Shake. The repercussions of such hasty endeavor might prove to be the anti-thesis of the very objective for which it was done.

As to those who responded vehemently to the video, shooting a series of irreverent comments, not on the video, nor on those who made it, but irrelevantly and preposterously on the religion of Islam at large, once again, I say what has Islam to do with such minute endeavor that five apparently Muslim individuals engaged on? Popular culture proves to be, one more time, as I happen to have pointed out in a previous article, “A Distorting Telescope” whereby cultures and identities dissimilar to one’s own are prejudged and essentialized in inaccurate concepts and categories.