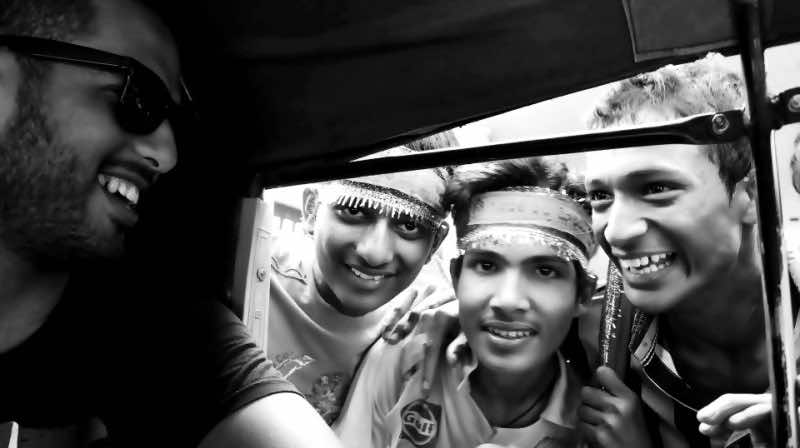 While looking from my large window, I could see a big lake and big buildings. On the road, there were big and luxurious cars and almost no pedestrians, actually no sign of human life as if robots conquered our planet. I got bored from the same automated scene as it was my forth time glancing through the window looking for something entertaining. Then, I drew the curtains to close that boring scene and jumped over my king size bed with four pillows made from different materials. I enjoyed changing the pillows every now and then, and switching on and off the endless lights of my room whilst the nice breeze coming out of the air conditioner massaged my face.

One day later, I was sweating to death while sleeping on the floor in the house of people I didn’t know. I had a strong backache. I couldn’t get a straight hour of continuous sleep. I noticed while looking at a small and dirty mirror that my eyes and their surrounding were darker. “My face is yellow ‘You look like pale,'” I said to my reflection in the mirror which was too tired and knocked out to answer me.

One day Before, I had finally arrived to India, at around 3am. Incredible India. I got to understand the real meaning behind the word “incredible” as it includes a lot of outstanding facts about this special area of the world and its cultural platform. As I was taking the stairs down in Hyderabad airport towards the exit, coming from one of the prestigious hotels in Qatar, I felt like being in a Bollywood movie.

Everyone was involved in a staring context. They were curious to discover this parasite creature entering their land. I was one of the very few foreigners taking the plane from Qatar. All I had at that moment was the name of a place I should manage to reach.

Before my departure from Morocco, I had arranged all administrative papers needed for the trip. I was pretty excited to start my journey full of unknown circumstances. I had been in touch with one of the AIESEC members the night before my taking-off. All we agreed upon was the meeting point and time, Begumpet 6.30 am. That was all I was aware of.

When I asked about the bus leading to my destination and took my seat, I figured I was the only passenger in the bus. The adventure has just begun. The road was damaged with not much lighting. People were working in some constructions; others were sleeping in the street. I have also noticed a lot of street dogs, a lot more than we have back in Morocco. Once I reached my destination, three men approached the bus door screaming “auto, auto sir!” (auto means the yellow motorcycle commonly used as a taxi). They were very surprised when I said “No thanks.” I walked away from them to some stairs and took off my backpack whose weight was already pulling me down like a ninety years old man. Around half an hour passed when one of them kindly suggested calling the person I was waiting for. I was feeling a little bit unsafe during all this time when they were having a loud discussion which was clearly about me. I was relieved as they ended helping me. The auto driver called. The person I was supposed to meet said he would pick me up in half an hour. I felt released.

I crossed the road towards the sheltered bus stop on the other side prior to the advice of the auto-drivers in order to avoid pickpockets, before they had left. I was filling my waiting time by reading few lines from my book and talking to the tickets guy with whom I had few laughs. I finally met the person I was emailing for the last 3 months, after waiting for two hours.

It was already daylight as we were heading to the apartment I was supposed to stay in when I had a flavor of the mad traffic of Hyderabad with a lot of motorcycles and horn sounds. After driving for an hour and being lost for another hour, we reached the destination and I met the first intern in India, a German. It occurred to me that the flat assigned for me was not ready and that I had to stay with other interns until they find accommodation for me. I felt disappointed (especially after other interns shared their story about when they first came and how they struggled with accommodation for a long time). To my surprise, there was no bed for me, so I had to sleep on the floor. They urged me to find another place because they won’t feel comfortable. Besides the rudeness, I could understand them. Then I remembered my night in Qatar and hoped if I had only one pillow of the fantastic four. I think I should stop watching fantasy movies. This is more like “Prison Break,” or “Into the Wild.” But it was exciting. The journey in discovering the unknown had just begun.

The three first days in India were quite terrible. I spent every night in a different location while being urged to take my stuff out of every house, every time. Electricity was cut off around 5 hours a day on average. Drinkable water was scarce. I was angry with all the lies and fake promises. I didn’t like anything around and started to look for things to criticize. I felt a very negative wave inside me about the people and the environment around me.

The third day in India, I noticed the beautiful Adan (call for prayer) from every corner of the neighborhood. “At least, something good about this place” I told myself. Later, I decided to go for a walk to discover the region. Few meters from home there was a local shop whose owner kindly directed me when I asked him about the nearest Mosque (Masjid, Indians say). After prayer, I made the best meeting so far in India. A 13-year-old boy came to me asking: where are you from? One could see from my appearance and the way I was dressed that I was not from here.

Since then, many questions followed making me amazed by the politeness and smartness of that boy, Shoaib. He was a clever boy with an authentic smile, knowledgeable about many things which remain a mystery to many kids at his age. I was learning from him.

The following day, I went to the shop guy asking for a close by internet café in order to get in touch with the world. He was with a guy called Chafi. I was introduced to both, not knowing at that time, they will be my first friends in India. The shop guy, Salman, is Mr. Google of the neighborhood. He knows a little bit of Arabic from the few years’ experience he had in Kuwait. The conversation then took a whole different perspective also with Chafi, the software engineer, cracking loads of jokes. Since that day, I got introduced to many people and made loads of friends, among which some speak almost no English. Besides that the living conditions didn’t get better, it seems that getting to know more people made me get closer to the culture, allowing me to see my tough times as lessons and my new encounters as blessings.

That’s when it occurred to me from what I have experienced and what my friend Adnane told me and it became my motto afterwards. “It’s not about how far you travel, but how much positive energy people put on you and vice versa.” That’s what put a flavor to my experience in India making my following days taste better…