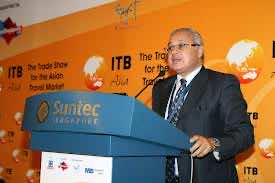 Egypt will cancel its visa for tourists coming from the Maghreb countries in a move to boost it tourism sector, which has suffered from political turmoil since the January 25th revolution.

The Egyptian Minister of Tourism, Mr. Hisham Zaazou, said on Monday that President Mohamed Morsi approved a visa exemption for tourists coming from the Maghreb.

Mr. Zaazou, who was participating in the Arab Forum for Media Tourism being held in Cairo from 23 to 28 February, said that he presented a memorandum to President Morsi to abolish the requirements for a visa fro tourists coming from Morocco, Tunisia and Algeria, which he agreed to in accordance with certain regulations to be put forward.

“Egypt welcomes Arabic tourism and seeks to remove all obstacles facing tourists coming from the Gulf or the Maghreb countries,” Mr. Zaazou said.

Arab tourism to Egypt dramatically declined since the onset of the Egyptian revolution on 25 January 2011 due to the distorted image portrayed by some international media about the country. “Egypt is completely safe for tourism, and disorders are confined to only one square kilometers out of the whole country,” he said.

The Arab Forum for Media Tourism, held its fifth session in Cairo on Saturday, and will continue until Thursday. It is the largest concentration of media tourism in the Arab region.

The forum discusses ways to support bilateral tourism between Arab countries, especially in the countries affected by the recent political turmoils that swept across North Africa.