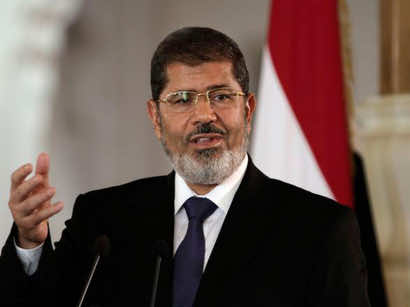 Egyptian President Mohamed Morsi on Monday called for a meeting with the country’s opposition to discuss upcoming legislative polls, amid calls for a boycott.

“I call on all the brothers in the different parties in all of Egypt to come… so we can sit and put in the place the guarantees for the transparency and fairness of the elections,” Morsi said in an interview on private satellite channel al-Mehwar.

The interview, which was due to be aired on Sunday evening, was transmitted hours later and ended at dawn, provoking much criticism on social networks.

Staggered parliamentary polls are set to start on April 22 over two months but opposition figures have slammed the timing of the vote while the country is gripped by political divisions and unrest.

“Called for parliamentary election boycott in 2010 to expose sham democracy. Today I repeat my call, will not be part of an act of deception,” he posted on his Twitter account.

The coalition organised massive protests against Morsi in November and December after he adopted now-repealed powers that shielded his decisions from judicial review.

Other NSF officials said the coalition, an alliance of mainly liberal and leftist parties, was yet to decide on its position.

Initially the election had been set to begin on April 27, with a new parliament to convene on July 6.

But the dates conflicted with pre-Easter and Easter holidays, prompting Morsi to announce new ones “in response to requests by Christian brothers,” a reference to the Coptic Church, his office said Saturday.

The Muslim Brotherhood — from which Morsi hails– and Islamist allies dominated the last parliamentary election in 2011 that resulted in an Islamist-majority house which a court annulled on a technicality before Morsi’s election last June.