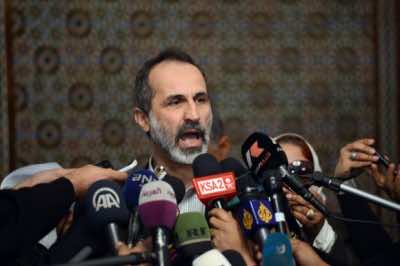 Coalition chief Ahmed Moaz al-Khatib said Monday that the Syrian opposition would consider participating in the next Friends of Syria meeting after receiving “specific” promises of support from key nations.

“The leaders of the (Syrian National) Coalition will meet today to discuss promises made by several major countries, which have asked us to cancel the boycott and give clear and specific support for the Syrian people,” he told  reporters in Cairo.

The Coalition had announced on Saturday its intention to withdraw from an 11-nation meeting of the Friends of Syria in Rome on Thursday and to cancel planned visits to Washington and Moscow in protest at the “international  silence” over “crimes committed against the Syrian people.”

The boycott decision came after surface-to-surface missiles slammed into a district of Aleppo, killing at least 58 people, according to the Syrian Observatory for Human Rights.

The United States on Sunday urged the opposition group to reconsider pulling out of the Rome summit, which the new Secretary of State John Kerry  will attend.

Khatib said on Monday that a visit to staunch Damascus ally Russia would be “postponed until we see how things progress”.

The Russian leadership has a particular moral and political responsibility because they are still supporting the regime with arms,” he added.

The opposition leader accused Damascus of rejecting a call for dialogue made at the end of January, saying “permanent procrastination… has crippled the initiative.”

“Dialogue is not meant to buy time and procrastinate. The regime rejected even the simplest humanitarian request, which was the release of the detainees.

We demanded the freeing of the women first, but the regime did nothing,” Khatib said.

But he left the door open to future negotiation.”We will always consider decisions that could stop the killing and destruction.”

Syrian Foreign Minister Walid al-Muallem said on Monday during a visit to Moscow that the government was “ready for dialogue with all who want dialogue, including those who are carrying arms.”