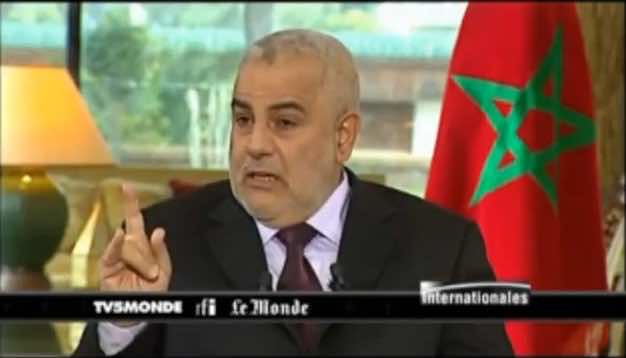 The head of the Moroccan government, Mr. Abdelilah Benkirane, on Sunday gave an interview to the French TV Show “Internationales,” broadcasted on French channels RFI and TV5.

Responding to one of his interviewers’ questions about his relations with King Mohammed VI, Mr. Benkirane made it clear, that “my relation with his majesty, since my first day as head of the Moroccan government, has been exceptional, regardless of the rare occasions when our political stances differ, which is something normal.”

“His majesty, however, remains the supreme chief of the nation, and his decisions are to be respected,” he added.

Mr. Benkirane also affirmed that he would not hesitate to leave office if his relations with the king “did not seem to work.”

“My government draws no distinctions between men and women,” responded Mr. Benkirane to a question about the noticeable absence of women in the composition of his government.

“What Europeans need to understand is that we cannot achieve in two or three years time what they have achieved in two centuries as to women’s inclusion in the political sphere,” he added.

He went on to say that “Morocco is experiencing an ongoing drastic change, and women have now, more than any time before, found their way to important political positions within the Moroccan government.”

Asked about the Moroccan-Algerian relations, Mr. Benkirane affirmed that Morocco has always enjoyed exceptional binds with Algeria—beyond their sometimes conflicting political interests—principally manifested in their religious, linguistic and cultural commonalities.

“It is unfortunately the Sahara issue, as old and enduring as it is, that has strained relations between our nations,” he stated.

“Our frontiers are already open to Algeria, but we hope that our Algerian neighbor will do the same and open its frontier to us,” the head of the Moroccan government added.

Mr. Benkirane responded positively to a question about the nature of Moroccan French relations since his appointment. “Relations between Morocco and France are so obviously particular, or I would say even better today, that it may even seem a banality to question that,” he stated.

Mr. Benkirane also recognized France’s stance in support of Morocco concerning the Sahara issue, and described it as being “a reasonable position that flows in parallel with Moroccan interests.”

“Our perspective is distinct from that of other nations ruled by Islamist parties, and our particularity and originality tends to be subject to envy,” he added.

When asked about the 20th February movement, Mr. Benkirane affirmed that as long as well-grounded reforms are taking place in Morocco, a thing that has already brought considerable change according to him, “the 20th February movement will morph into having very specific political stands that rhyme with those of the parties constituting the Moroccan government.”

“No one is preventing the 20th February movement from taking its concern to the streets, and those whom you claim are arrested for their mere affiliation to the 20th February were actually found guilty of illegal acts, orthogonal to what the movement is doing,” he added.

“His majesty king Mohammed VI entrusted me with a text to read before the heads of Islamic States, wherein Morocco salutes France endeavor in Mali,” he added.

Asked on the occurrences of the Arab Spring and on the political mutations that neighboring nations have been experiencing, Mr. Benkirane said that “though we unquestionably share commonalities with our neighboring Arab and Muslim countries, we have our own particularities, and our political reforms had started years before the uprisings.”

“We also owe Morocco’s exceptional case to our king, who, before playing his role as an authority, played the role of mediator in such critical moments,” concluded Mr. Benkirane.

The head of the government denied the detection of any instances of torture inflicted on protesters who were allegedly detained in Moroccan prisons, and insisted on drawing a clear-cut distinction between prisons and security services.

However, Mr. Benkirane affirmed the existence of “particular treatments” to prisoners in Moroccan prisons, and rationalized this reality as necessary “to maintain order in prisons.”