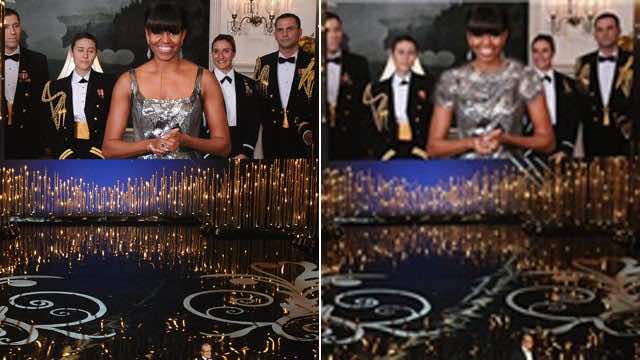 The Iranian semi-official news agency “Fars” altered an image of the United States’ first lady Michelle Obama at the Oscars Sunday night in order to fit the mindset of its conservative readership, ABC NEWS reported on Monday.

The original photo was showing Mrs. Obama wearing a sleeveless silver gown by Indian-born designer Naeem Khan which exposed the shoulders and partial chest of the First Lady. The Iranian news agency photoshopped the image to show her instead with covered shoulders and chest.

The photo of First Lady Michelle Obama being altered is but one of many instances of manipulation made by Iran’s media.

The last instance of this manipulation was during the Non-Aligned Movement summit held in Iran last August, when Iran’s media distorted a speech delivered by Egypt’s President, Mohammed Morsi, to fit the Iranian regime rhetoric.

Some news outlets in other conservative countries have also resorted to such unethical practice. In 2011, images of Brazilian supermodel Gisele Bundchen were digitally altered to cover the model, who was starring in a new H&M campaign. The photo alternations were made to ads running in Dubai.

American singer Mariah Carey was also a subject to photo manipulation when her album shots were photoshopped in Saudi Arabia to more closely align with the values of the conservative country.