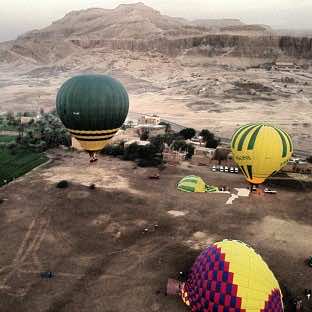 A third British tourist has died after a hot air balloon exploded in the Egyptian city of Luxor on Tuesday, killing up to 19 people, tour operator Thomas Cook said. The latest victim died after being taken to a local hospital for treatment to injuries. A fourth Briton was hurt in the accident and is receiving treatment in hospital.

“We can confirm that a third Thomas Cook guest (one of the two originally reported as injured) has now sadly died,” the tour operator said in a statement. A spokesman confirmed that all four Britons involved had flown to Egypt from Britain.

Thomas Cook has temporarily suspended sales of hot air balloon rides in Egypt pending an investigation into the crash, which occurred during a sunrise flight over the ancient temple city. The British Foreign Office did not confirm the death toll, saying only that “we believe a small number of British nationals are involved in an incident in Luxor this morning”, and that consular staff were offering assistance.

Peter Fankhauser, chief executive of Thomas Cook UK and Continental Europe, said: “What happened in Luxor this morning is a terrible tragedy and the thoughts of everyone in Thomas Cook are with our guests, their family and friends.

“We have a very experienced team in resort with the two guests in the local hospital, and we’re providing our full support to the family and friends of the deceased at this difficult time.”