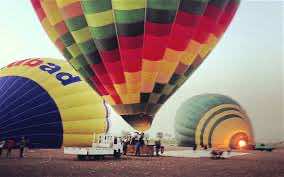 Nine Hong Kong people are feared to be among the 19 killed after a hot air balloon exploded over Egypt’s ancient temple city of Luxor on Tuesday, a tour operator said.

Four Japanese tourists were also said to have died. “We believe that there is a high possibility that nine of our customers have died,” said Raymond Ng, general manager of travel agency Kuoni, which organised the Hong Kongers’ tour.

The five women and four men were aged between 33 and 62, Ng told a news conference. Their relatives were to fly to Cairo later on Tuesday via Qatar, accompanied by three staff from Kuoni, he added.

The nine were among a group of 15 Hong Kongers who had left for Egypt on February 22. Ng said that according to local employees, the balloon caught fire about an hour after it had set off, plummeting to the ground two minutes later.

The news will fuel jitters among Hong Kongers about their safety on foreign holidays, after eight residents of the southern Chinese territory were killed during a hostage crisis in the Philippine capital Manila in August 2010.

Ng said Kuoni had a good working relationship with the balloon operator and had done business with it for several years. He added that he had not heard any official confirmation of the deaths from Egyptian authorities.

Reacting to news of the feared deaths, Hong Kong’s Chief Executive Leung Chun-ying said: “I feel very sad about this event and extend my condolences to
the relatives of the casualties.”

Footage on Hong Kong’s Cable TV news channel showed emergency service vehicles rushing to the scene of what appeared to be scorched earth where the balloon had landed.

The Japanese victims were two pairs of married couples in their 60s who travelled from Tokyo, according to local media.

The balloon was carrying 21 people at an altitude of 300 metres (1,000 feet) during a sunrise flight when it caught fire, a security official in Egypt said.

An employee at the company operating the balloon, Sky Cruise, said the pilot and one tourist survived by jumping out of the basket before it plunged to the ground.

The balloon had been floating over the west bank of Luxor, one of Egypt’s most renowned archaeological sites and home to the famous Valley of the Kings and the grand Temple of Hatshepsut.

In 2009, 13 foreign tourists were injured when their hot air balloon hit a phone mast and crashed at Luxor. Sources at the time said the balloon was overcrowded.