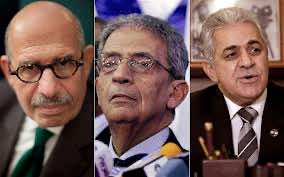 Egypt’s main opposition coalition, the National Salvation Front, said Tuesday it will boycott upcoming parliamentary elections due to a lack of guarantees of a transparent process.

“The decision of the Front, unanimously, is to boycott the elections,” NSF member Sameh Ashour told a news conference in Cairo after a meeting of the alliance grouping mainly liberals and leftists.

Ashour said the decision had come after its demands, including the formation of a new government “to save the country”, had been ignored.

“There can be no elections without a law that guarantees the transparency of the electoral process… without a real independence of the judiciary,” Ashour said as opposition activists broke out into chants against President Mohamed Morsi’s Muslim Brotherhood.

Officials in the opposition alliance had been locked in heated debate in recent weeks over whether or not to take part in the staggered elections, members said.

Mohamed ElBaradei, a prominent member of the Front and former head of the UN atomic agency, had issued his own boycott call on Saturday.

“Called for parliamentary election boycott in 2010 to expose sham democracy. Today I repeat my call, will not be part of an act of deception,” the Nobel Peace laureate wrote on Twitter.

The NSF also shunned a national dialogue called for by President Morsi aimed at putting in place “guarantees for the transparency and fairness of the elections.”

“Of what guarantees can we speak today, while we have been refused an impartial government able to apply these guarantees,” said Ashour.

He accused the Muslim Brotherhood of wanting to “politically kidnap Egypt, to monopolise its institutions and dominate all the state organs.”

The Brotherhood and its Islamist allies had clinched an overwhelming majority in the legislative polls in the winter of 2011 and 2012, but the parliament was later dissolved when a court found irregularities in the voting system.

The NSF organised massive protests against Morsi in November and December after he adopted now-repealed powers that shielded his decisions from judicial review.

But anti-Morsi protests have slowed since he pushed through an Islamist-drafted constitution in a December referendum, with the mass rallies giving way to smaller, and often violent, protests.

The opposition, less organised than the Muslim Brotherhood, has insisted the president appoint a new government before the election while the presidency says the new parliament should have the right to appoint the cabinet.