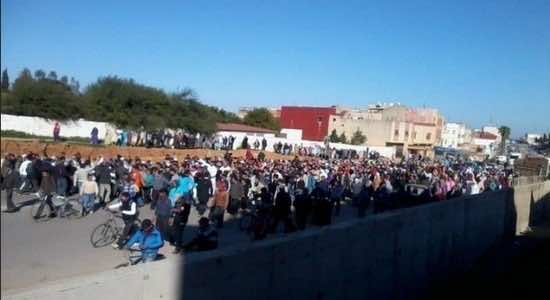 The body of a kidnapped little girl was found on Sunday evening in the city of Tifelt, 50 kilometers away from Rabat. The following day, a peaceful demonstration took place to condemn the crime and the lack of security in the city.

Fatima Ezzehra Khermaz, who was the daughter of a Moroccan soldier serving as UN peacekeeper in Congo, was kidnapped twelve days ago. In a statement to Medi 1 Sat TV channel, her aunt said the 6-year-old was innocently playing near the house the day when went missing. Her mother sent her twice to buy something from the shop.  When she went the second time she never came back, and “disappeared enigmatically.”

Her uncle said the family searched for Fatima Ezzehra in all neighborhoods to no avail. He then called the police to tell them about the incident. After twelve days, the body of Fatima Ezzehra was found on Sunday evening by a shepherd who coincidently came across a corpse wrapped in a plastic bag, near a cemetery in the neighborhood of Bouhmala, located in Tifelt.

Samir Bourass, a member of “Don’t Touch My Child Association,” told to the daily Assabah that the child’s family received a phone call from one of the kidnappers and demanded a sum of about 15O,000 dirhams (nearly $17,000), and  he later reduced the ransom to 60,000 dirhams, (nearly $7,000). He went on to say that the little child was brutally killed. The police opened an investigation over the alleged phone calls.

On Monday evening, Moroccan Association for Human Rights staged a peaceful demonstration in a protest over the lack of security especially after the murder of the soldier’s daughter. The demonstrators marched to various places in the city of Tifelt, including the municipality, the local hospital and the police station.

According to Goud.ma, the president of the regional security office of Khmissat, 74 kilometers away from Rabat, moved to the place of the gathering and promised the protestors to restore security to the city.