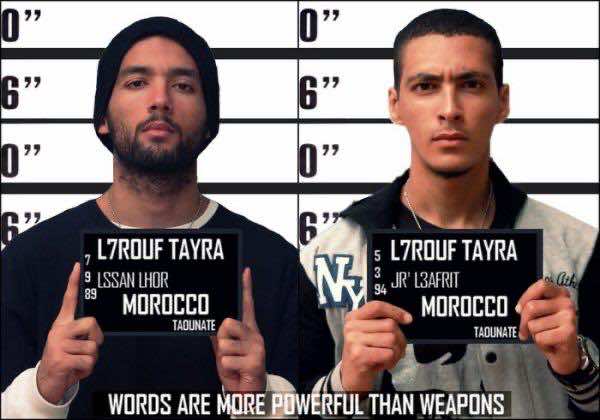 The margin or the periphery refers to those places which have been left behind systematically or inadvertently in the race for progress. People in the margin lag behind socially and economically, and usually lack the basic life necessities. The antithesis of the margin is the core or the center which cherishes power and domination. The relationship between the two poles is asymmetrical and unequal. In the context of Morocco we usually speak of the “useless Morocco” and “the useful Morocco” to mean the margin and the core!

People in the margin adopt different forms of resistance to redress the balance and change the status quo, since wherever there is power there is resistance as Michel Foucault once said. The rap band La7rouf Tayra (The Rebelling Letters) from the province of Taounate, which is on the extreme margin, chose the art of rap to resist and have their word said. As their name connotes, the band do not conform to the orthodox themes tackled by most rappers in Morocco but rebel against the mainstream rap to represent marginal people and their unheard cries.

Abdeslam and Jaafar, who are brothers, explain that their rap is different in that it is not rough and vulgar but purposeful and anyone can listen to it. “We don’t target only rap fans and those who usually listen to rap, anyone can listen to our music and feel it” says Abdeslam. The band sing in Moroccan Arabic, standard Arabic and American English. They have recently released a new album entitled “alarm bells” which includes a range of songs that evoke the suffering of the marginalized.

The album conveys the message that the band do not belong to any political movement or party despite their highly political songs, they only seek through their songs to raise awareness and consciousness towards a large marginal section of society whose voice is unheard and whose pain passes unnoticed. The album sets alarm bells ringing against social injustice and marginalization.