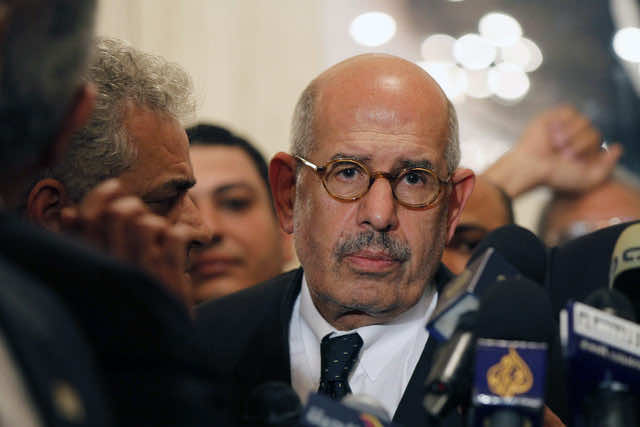 Egypt’s main opposition bloc has pulled out of elections due in April, expressing doubts over their transparency and rejecting a call from President Mohamed Morsi for dialogue.

With the gulf between the ruling Islamists and the opposition growing wider every day, US President Barack Obama told Morsi he had a “responsibility to protect” the democratic principles advanced by an uprising in 2011.

“The decision of the Front, unanimously, is to boycott the elections,” National Salvation Front member Sameh Ashour told reporters in Cairo Tuesday after a meeting of the alliance, which groups mainly liberals and leftists.

“There can be no elections without a law that guarantees the transparency of the electoral process… without a real independence of the judiciary,” Ashour said as activists chanted slogans against Morsi’s Muslim Brotherhood.

The decision came after NSF demands, including the formation of a new government “to save the country”, had been ignored, Ashour added.

Leaders of the opposition alliance have been locked in heated debate over whether to take part in the staggered parliamentary elections, members said.

Already on Saturday, Mohamed ElBaradei, former head of the UN atomic agency, Nobel Peace laureate and a prominent member of the Front, had issued his own boycott call, arguing it was necessary “to expose sham democracy”.

The NSF also shunned a national dialogue event set up by Morsi to establish guarantees for fair and transparent elections.

“Of what guarantees can we speak today, while we have been refused an impartial government able to apply these guarantees?” said Ashour.

He accused the Brotherhood of wanting to “politically kidnap Egypt, to monopolise its institutions and dominate all the state organs”.

Obama, in a statement issued after a phone conversation with Morsi, welcomed his “commitment to serving as a president for all Egyptians, including women and people of all faiths”.

Obama “emphasised President Morsi’s responsibility to protect the democratic principles that the Egyptian people fought so hard to secure”, the statement added, referring to the uprising that toppled autocratic leader Hosni Mubarak.

He urged all sides in Egypt to work “to build consensus and advance the political transition”.

Morsi argued his national dialogue was aimed at ensuring the elections would go ahead “with the highest degree of transparency and impartiality”.

In remarks aired on television, he said the door was still open to those staying away.

Saad al-Katatni, head of the Brotherhood’s Freedom and Justice Party, and Yunes Makhyun, chief of the main Salafist party Al-Nour did attend the national dialogue event.

Katatni ruled out the formation of a new cabinet before the elections, arguing a “change of government now would send a negative signal” with the country in the grips of a severe economic and political crisis.

Makhyun, whose party has tried to mediate between the government and the NSF, called for the formation of “an impartial government accepted by all political parties”.

The Brotherhood and its Islamist allies won an overwhelming majority in the legislative polls in the winter of 2011 and 2012, but when a court found irregularities in the voting system, parliament was later dissolved.

The NSF organised massive protests against Morsi in November and December after he adopted now-repealed powers that shielded his decisions from judicial review.

But anti-Morsi protests have slowed since he pushed through an Islamist-drafted constitution in a December referendum. The mass rallies have given way to smaller, often violent, protests.

The opposition, less organised than the Muslim Brotherhood, insists the president appoint a new government before the election. The presidency says the new parliament should have the right to appoint the cabinet.

The election is scheduled to begin on April 27, with a new parliament to convene on July 6.