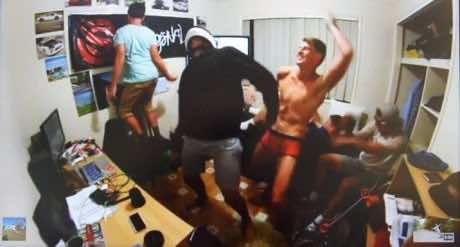 Salafist Muslims tried to prevent the filming of current Internet craze the “Harlem Shake” at a Tunis school on Wednesday, but were driven off after coming to blows with students, an AFP correspondent said.

When the dozen or so ultra-conservative Muslims, some of them women in veils, showed up at the Bourguiba Language Institute in the El Khadra neighbourhood, a Salafist bastion, students shouted “Get out, get out!”

One of the Salafists, wearing military gear and carrying a Molotov cocktail he never used, shouted “Our brothers in Palestine are being killed by Israelis, and you are dancing.”

The Islamists eventually withdrew, and the students were able to film their production.

On Monday, Education Minister Abdellatif Abid said a probe had been ordered into a previous staging two days earlier of a “Harlem Shake” by students in a Tunis suburb.

He said there could be expulsions of students or sacking of educational staff who were behind the staging of the dance.

In response, the ministry’s website was hacked and a call went out on social media for the staging of a mega Harlem Shake in front of the ministry on Friday.

The incidents come as more and people around the world emulate the craze, which was sparked by a group of Australian teenagers who uploaded a 31-second clip “The Harlem Shake v1 (TSCS original)” onto YouTube earlier this month.

It has since been viewed millions of times.