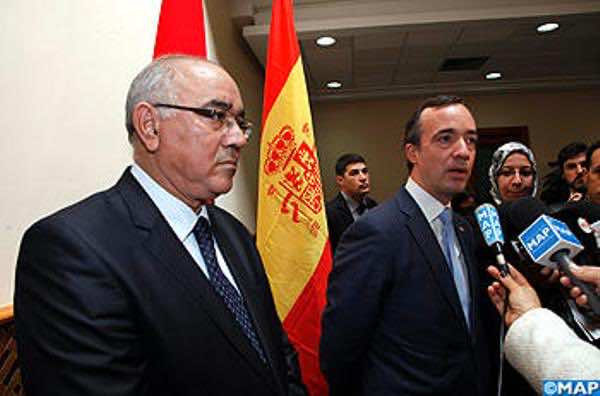 Moroccan minister delegate to the Interior Minister, Cherki Drais, and Spanish secretary of state for security, Martinez Vazquez, have agreed on the need for a collective and concerted approach in the area of security cooperation between Rabat and Madrid.

The two officials also welcomed, during a meeting Tuesday in Rabat, the high quality of operational cooperation between the services of the two countries, especially between Morocco’s Royal Gendarmerie and Spain’s Guardia Civil in the fight against drug trafficking by planes, and between the Moroccan General Directorate of National Police and the Spanish National Police, a joint statement issued after the meeting said.

The meeting, attended by senior security officials of the two countries and held as part of the Declaration of the G4 Interior Ministers, has enabled the two parties to survey the various aspects of security cooperation, especially those relating to transnational organized crime, terrorism, drug trafficking and illegal migration.

Regarding the management of migration flows, the source added, the two sides stressed the need to strengthen intervention measures of the two countries’ competent bodies within the framework of consultations in accordance with their bilateral, regional and international commitments and with the relevant UN instruments.

In a press statement after the meeting, the Spanish official emphasized coordinated action between the interior ministries of the two countries, particularly with regard to terrorist threats, the organized crime and other 21st century security challenges, urging concerted solutions at the international level.

For his part, Drais noted that sectoral meetings between Moroccan and Spanish security services will be held on the sidelines of this meeting in order to come up with practical proposals to further develop bilateral cooperation.