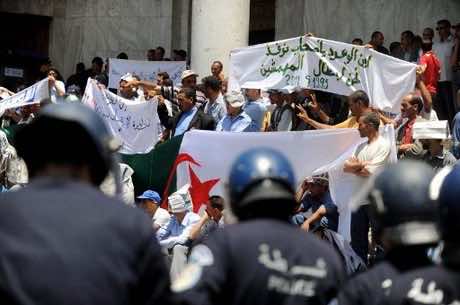 People angry over the allocation of subsidised housing have clashed with police in a town east of the Algerian capital, leaving 52 people injured, an AFP correspondent said on Wednesday. Rioters sacked the mayor’s office in Bodj Bou Arreridj, 230 kilometres (145miles) from the capital, and partly blocked a motorway, causing tailbacks.

Forty-three demonstrators and nine police were being treated in hospital on Wednesday, a day after the protests broke out when a list of 935 people being allocated social housing was published.

The demonstrators gathered in front of the prefecture with banners that read: “We demand our right to housing” and “Down with corruption and favouritism.”

Riot police responded with tear gas to disperse them. “We published a list of beneficiaries for 935 homes, which people have aright to contest. But there are demonstrations because there are more than 26,000 people seeking social housing,” local official Mamoun Belmouhou said.

He said the authorities had already received 3,000 complaints.

The publication of housing allocations often results in violence in Algeria, which has a serious shortage.

President Abdelaziz Bouteflika promised to build more than one million homes under a 2010-2014 development plan, but construction is slow and complaints of corruption are numerous.