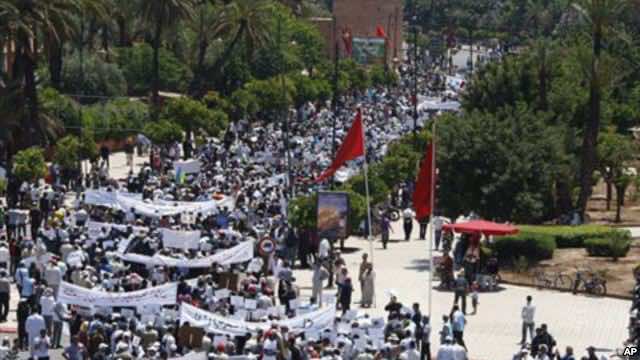 A Moroccan court on Wednesday jailed six people for up to two years over violent protests in the southern city of Marrakesh last December in which dozens of policemen were wounded.

Ten people arrested in connection with the clashes had already been handed prison terms in January ranging from 18 to 30 months, while two teenagers were separately jailed for two months.

The six convicted on Wednesday were accused by the court of first instance in Marrakesh of forming an “armed mob, damage and destruction to public buildings, insulting officials performing their duties and disobedience.”

On December 28 and 29, protests were held in poor neighbourhoods in the ochre city, Morocco’s top tourist destination, against high water and electricity prices, which degenerated into clashes with the security forces.

More than 60 people were wounded in the violence, according to official figures, including 52 members of the security forces.

Morocco introduced constitutional reforms in 2011 in a bid to contain Arab Spring protests that erupted in the north African country, as similar unrest toppled regimes in Tunisia and Egypt.

The reforms helped contain the unrest, but there remains widespread frustration at the slow pace of reform, while sharp price increases have fuelled discontent, as the government battles a worsening economic crisis.