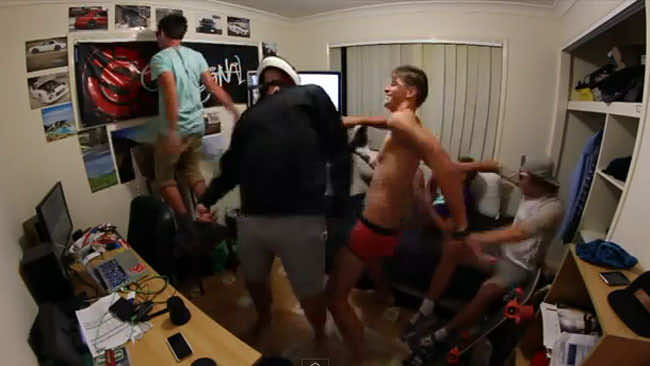 An electro-dance craze that has gone viral on the Internet is sparking insults and fisticuffs in Tunisia, where secularists and Islamists are battling for the soul of a nation widely viewed as the Arab world’s most progressive.

The social divide in this small North African country was sharply punctuated on February 6 when a lone hooded gunmen shot to death leading leftist opposition figure Chokri Belaid outside his home in the capital. The authorities say the still-fugitive assassin was a Salafist Muslim, a follower of a puritanical form of Islam with numerous adherents in Tunisia and whose movement is blamed for a growing wave of violence around the country.

Salafists want society to be governed by sharia, or Islamic law, rather than the liberal rules prevalent in much of Western society. A number of social media sites belonging to Salafists and other Islamist
groups have denounced the “Harlem Shake” as indecent, with participants, some even dressed up as Salafists, smoking, dancing wildly and simulating sexual acts.

Wednesday saw more violence, but the worst injuries were probably only bruises and bloodied noses, when Salafists tried to prevent the filming of a “Harlem Shake” at a Tunis school. At another school, south of the capital, students reacted angrily when their principal banned them from filming. They hurled stones at the police, who responded with tear gas.

When a dozen ultra-conservative Muslim youths, some of them women in veils, showed up at the Bourguiba Language Institute in Tunis’s El Khadra neighbourhood, a Salafist bastion, students shouted “Get out, get out!

One of the Salafists shouted: “Our brothers in Palestine are being killed by Israelis, and you are dancing.” He said he wanted to explain what behaviour Islam considers as “haram” (prohibited) and “halal” (permitted). That drew the ire of one youth, wearing the mask of a deformed face
featured in the American horror film “Scream.”

“Mind your own business and keep your lessons of morality for others,” he shouted. “No guy like you is going to stop us from doing what we want!” Another Salafist, bearded and wearing military gear, was found to be carrying a petrol bomb, but was surrounded by teachers who prevented him from using it.

The incident degenerated into fisticuffs before the Salafists retreated. Masters student and organiser Fidaa Jebali later showed an AFP correspondent a red welt on her cheek. “One of the veiled girls called me an apostate before slapping me,” said Jebali from behind huge rose-coloured spectacles. “It’s not normal to have to suffer this in 2013.”

“The security forces tried to convince them to put out the smoke bombs, but they refused and threw stones at them and wounded two policemen. The forces of order were obliged to respond with tear gas,” he added.

On Monday, Education Minister Abdellatif Abid said a probe had been ordered into the staging two days earlier of a “Harlem Shake” by students in a Tunis suburb.

He said there could be expulsions of students or sacking of educational staff who were behind the staging of the dance.  The Saturday version was purportedly staged by students from Menzah 6
district in a school compound, with some in shorts and others sporting fake  beards and the tunics typically worn by Salafists.

‘Prepared to resort to violence’

The Islamist movement has carried out a wave of attacks in the past year, including on galleries, cultural festivals and Sufi shrines. In June, Salafists destroyed works of art exhibited in a chic suburb of
Tunis that they considered “blasphemous.”

That sparked clashes across the country in some of the worst violence since the January 2011 revolution that toppled president Zine El Abidine Ben Ali. More and more people around the world are emulating the dance craze, which was sparked by a group of Australian teenagers who uploaded a 31-second clip “The Harlem Shake v1 (TSCS original)” onto YouTube in early February.

And two teachers at the Bourguiba Language Institute said these clashes between secular and Islamist youth reflect wider tensions in the country, where the economy has founded since the revolution and unemployment is high.

“This is a sample of what is going on in Tunisia,” said French professor Manoubia Ben Ghadahem. “A minority is prepared to resort to violence to impose its law.” Colleague Imen Gamoudi said: “Dance is a means of expression, and these performances don’t hurt anyone. Quite the contrary, they’re great!”

The controversy comes as premier-designate Ali Larayedh, of the ruling Islamist party Ennahda, presses efforts to form a new coalition government aimed at pulling Tunisia out of the deep crisis sparked by Belaid’s murder. Ben Ghadahem said the tough stand of Education Minister Abid, a secular figure, on the “Harlem Shake” was apparently a political gambit.

“He’s just jockeying for a job in the new cabinet,” she said. “He ought to be dealing with the real problems in our universities rather than wasting time with these superficial issues.” And to make a point, youth activists have put out a call for a mega “Harlem Shake” to be staged on Friday — in front of the education ministry.