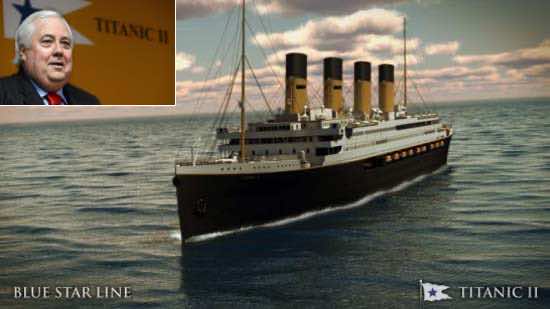 An Australian billionaire, named Clive Palmer, has announced his intention to build a replica of the legendary ship Titanic. The new ship, which will be constructed in China, will start sailing in 2016, BBC Arabic reported on Wednesday.

Its future owner declared that more than 40,000 people have already expressed interest in buying tickets to go on the trip that will depart from Southampton, England, to New York.

The new ship will replicate the romantic life featured in the famous film Titanic.

According to the Associated Press, passengers on board the replica ship will dress in the fashion of that period and eat dishes from the original menu, in dining rooms copied from its ill-fated predecessor.

Titanic is one of the most famous vessels in history. Out of the more than 2,200 people it was carrying when it sank on April 15, 1932, only 700 people survived.

Part III: The story of the forgotten Arab victims of the Titanic, told 100 years later

Part II: The story of the forgotten Arab victims of the Titanic, told 100 years later

The story of the forgotten Arab victims of the Titanic, told 100 years later