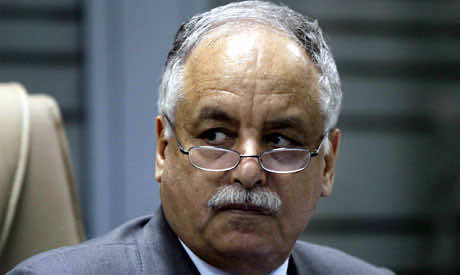 Libya’s prime minister denied on Thursday reports that Moamer Kadhafi’s imprisoned last premier is in a critical condition after being tortured in jail, saying Al-Baghdadi al-Mahmudi is in “good health.”

“Al-Baghdadi is in good health… and is being treated humanely,” Prime Minister Ali Zeidan told a new conference.

The claim has also been dismissed by the commander of the national guard, which runs the Tripoli prison where Mahmudi is being held.

“Baghdadi al-Mahmudi has not been subjected to any ill-treatment and has been granted his full rights guaranteed by international law and the principles of human rights,” Khaled al-Sherif told AFP on Wednesday.

A lawyer of Mahmudi, who is on trial in Libya accused of killing civilians and of financial crimes, charged on Wednesday that the last premier of deposed and slain Kadhafi had been tortured in prison.

Mahmudi “is in critical condition as a result of the torture he has suffered,” said Tunisian lawyer Mabrouk Kourchid, warning that “he could die”.

The lawyer gave no further details nor did he reveal his sources for fear they could suffer reprisals.

Paris-based lawyer Pierre-Olivier Sur also said on Wednesday he would be “forced to refer to the UN special rapporteur on torture and the commission of human rights” because his client Mahmudi has been allegedly tortured.

Mahmudi fled to neighbouring Tunisia in September 2011, shortly after rebels seized Tripoli and effectively put an end to more than four decades of Kadhafi’s iron-fisted rule.

He was arrested there and extradited to Libya last June and is standing trial for what the prosecutor general’s spokesman said were “prejudicial acts against the security of the state and financial crimes.”

At his last hearing on February 11, Mahmudi appeared weak but in good health.

The next court hearing was set for March 18.

Along with Seif al-Islam, Mahmudi is one of the few remaining keepers of the many state secrets of Kadhafi’s regime.

A doctor by training, Mahmudi was loyal to Kadhafi until the end. He served as premier from 2006 up to the final days of the regime, while also overseeing vast fortunes in the oil-rich nation.