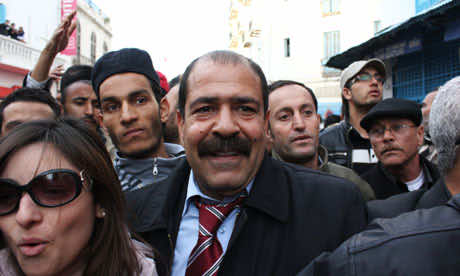 An alleged Salafist suspected of assassinating Tunisian politician Chokri Belaid earlier this month was identified by his own father on Thursday, confirming information AFP received from a judicial source.

Taieb Gathgathi, from the northwestern region of Jendouba, said of his son Kamel: “From what I know of my son, I can say he is incapable of hurting a fly.

“He is a good type, an angel on earth, but if he has committed a crime then I pray to God that justice is done,” told private radio station Mosaique FM.

Gathgathi said Kamel had studied in the United States and now lived in Tunis, but that he rarely sees him.

“I have seen him rarely since I separated from his mother. I’ve seen him maybe once since he’s been in Tunis,” said Gathgathi, speaking from Jendouba.

“He studied in the United States at the expense of the Tunisian state, and he was offered a job at the interior ministry,” he added, without elaborating.

Separately, a judicial source with access to the file of the judge investigating Belaid’s murder confirmed that the suspected assassin was Kamel Gathgathi, from the Jendouba region, who had lived in America.

Interior Minister Ali Larayedh, who is also prime-minister designate, said on Tuesday that the killer of the leftist opposition leader had been identified, that he belonged to a radical Islamist group and that four suspected accomplices had been arrested.

On Thursday, President Moncef Marzouki testified in the murder probe, after the family of Belaid, who was a fierce critic of the ruling Islamists, said he had information about those behind his killing, which plunged Tunisia into political turmoil.