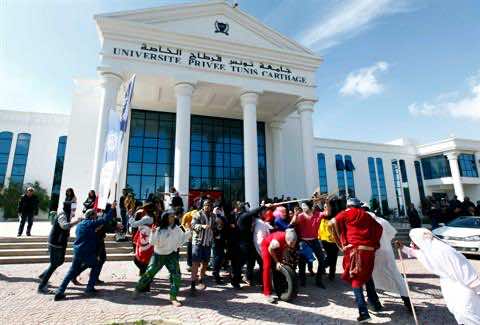 Ten thousand people promised to show up in front of Tunisia’s education ministry on Friday to perform a protest version of the “Harlem Shake” dance craze, but only a few dozen braved the rain to do so.

Performances over the past week have infuriated ultra-conservative Muslims with their smoking, wild dancing and simulation of sexual acts, and led to punch-ups with them and clashes with police.

On Monday, Education Minister Abdellatif Abid said a probe had been ordered into the weekend staging of a “Harlem Shake” by students in a Tunis suburb, and the Facebook organised mega-shake was meant to be in protest.

“We are here to make the minister of education understand that he cannot stop us from dancing,” said Randa, a 28-year-old organiser of the hapless event. “This policy of suppressing rebellious spirits is no longer acceptable.”

A number of ministry employees went outside to watch the event, which was done without its characteristic electro-dance music accompaniment. “Freedom, freedom,” the youths shouted before singing the national anthem and then dispersing.

More and more people around the world are emulating the dance craze, which was sparked by a group of Australian teenagers who uploaded a 31-second clip “The Harlem Shake v1 (TSCS original)” onto YouTube in early February.

It has become this week a symbol of the cultural battle raging between secularists and Islamists for the soul of a nation widely viewed as the Arab world’s most progressive.

Three times this week, Islamist militants have attacked students in the capital and in Sidi Bouzid, the cradle of Tunisia’s revolution two years ago, denouncing the performances as indecent.