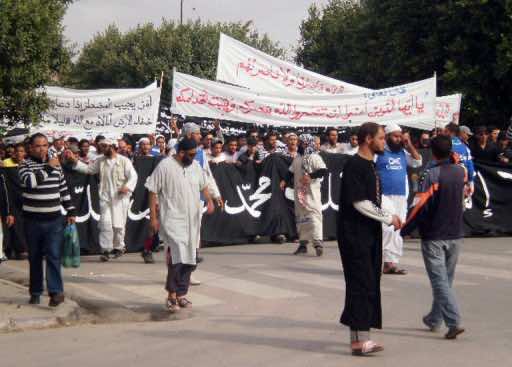 Hundreds of Salafists protested on Friday in the Tunisian town of Sidi Bouzid, calling for the release of an imam arrested as part of an inquiry into a gunfight between police and radical Islamists.

The crowd shouted “Ali Larayedh, coward!” referring to the interior minister who has been tasked with forging a new coalition government.

The protesters were demanding the release of of Khalifa Karaoui, the imam of a mosque in Sidi Bouzid who was arrested in southern Tunisia on Tuesday.

Karaoui is suspected of having ties to a group of Salafists accused of opening fire on the police last week, wounding two of them.

The Salafists took refuge in a mosque in Sidi Bouzid, before fleeing, assisted by other Islamists, who prevented the police from entering the place of worship.

The region of Sidi Bouzid which was the cradle of Tunisia’s revolution two years ago, has a strong presence of Salafists, or ultra-conservative Muslims, somewhere of whom openly call themselves jihadist.

Since the revolution, they have been implicated in a wave of violence in Tunisia, with the authorities blaming them for an attack on the US embassy last September and the assassination of leftist politician Chokri Belaid last month.