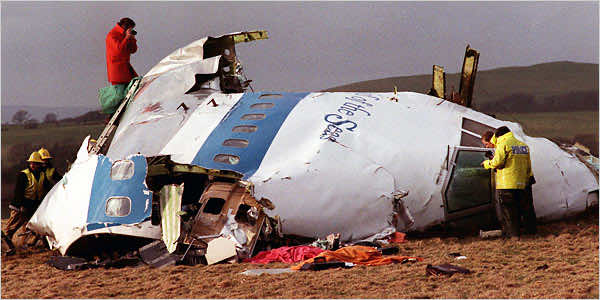 British and US detectives investigating the 1988 bombing of a passenger jet over the Scottish town of Lockerbie have met with officials in Libya, Scotland’s chief legal officer said on Friday.

Scotland’s Lord Advocate Frank Mulholland said four British police and prosecutors, along with an FBI delegation from Washington, had met senior Libyan officials on Monday over the attack on PamAm flight 103, in which 270 people were killed.

Libya admitted responsibility for the bombing in 2003 and eventually paid $2.7 billion in compensation to relatives of the victims, most of whom were American passengers on the flight from London to New York.

“Visas were granted for Scottish police and prosecutors to travel to Tripoli to meet with their counterparts in progressing the investigation into the Lockerbie bombing,” said Mulholland.

“Senior officials from Crown Office (Scotland’s prosecution service), Dumfries and Galloway Police and the FBI attended a series of meetings in Tripoli with ministers and senior officials from the Libyan government to discuss the ongoing investigation.”

Mulholland said the US and Scottish delegations had held “positive” discussions with Libyan officials on their requests for Tripoli’s cooperation with the probe.

The detectives also reiterated that they are focused on “identifying others involved in this act of state sponsored terrorism”, Mulholland said.

The Scottish government had freed him from jail three years earlier on compassionate grounds.

Since the toppling of the regime of late Libyan dictator Moamer Kadhafi in 2011, British and US investigators have been working to establish whether other individuals in Libya could be brought to trial over the attack.

The detectives’ visit, which was announced by British Prime Minister David Cameron in January, follows a visit to Tripoli by the head of the FBI and Scotland’s top prosecutor in April 2012.