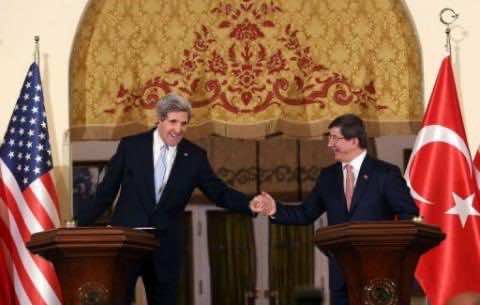 Syria and ally Russia denounced a US pledge to provide direct non-lethal aid to rebel fighters, saying it will fuel more violence in the two-year conflict, which claimed dozens more lives on Friday.

Just two weeks away from the second anniversary of the uprising against President Bashar al-Assad, UN Secretary-General Ban Ki-moon warned that the spiralling conflict in Syria that has killed at least 70,000 people was breaking the country apart.

US Secretary of State John Kerry discussed the crisis with Turkish leaders in Ankara on Friday after Washington said it would provide direct aid to the rebels in the form of food and medical assistance, as well as $60 million in funding for the political opposition.

Russia’s foreign ministry said the decision would backfire and encourage “extremists to take power by force.”

But senior opposition figure Burhan Ghalioun told AFP it was the very failure to arm the rebels that “favours the rise of extremists,” saying he hoped Washington would realise this was a “mistaken policy.”

Russia’s UN Ambassador Vitaly Churkin said the US decision was “unfortunate” and that it was time for the opposition to come up with a “well-articulated political programme to be able to enter into talks with the Syrian government.”

A Syrian government newspaper said US and European decisions to back Syria’s rebels with direct aid would only lead to more bloodshed and encourage “terrorism.”

A State Department official travelling with Kerry said Washington wanted outside powers, including Moscow, to push for a transition as agreed in Geneva last June, as the new secretary of state visited key regional ally Turkey.

“Together we work to strengthen the Syrian opposition so that we are in a position now to be able to do more,” Kerry said, adding that the United States and Turkey were trying to reduce the money “flowing to Assad regime’s war machine.”

“There is no legitimacy in a regime that commits atrocity against its own people,” he said.

Kerry had announced the aid package after talks in Rome on Thursday of the Friends of Syria group of Arab and Western nations.

The move marked a significant shift in US policy but falls short of rebel demands for Western backers to supply the rebellion with weapons or non-offensive military equipment.

In a sign of growing diplomatic momentum, Russian President Vladimir Putin and US President Barack Obama discussed the conflict by phone, with Putin noting “the need to end military activities as soon as possible.”

The UN chief warned of Syria disintegrating in the absence of a resolution to the conflict.

“The military solution in Syria is leading to the dissolution of Syria,” the UN chief said in Geneva. “What atrocity must occur to finally stir the world to act?”

The death toll continues to grow, with claims from the coalition that regime forces executed and burned 72 people in a new massacre on Monday in Malkiyeh village in northern Aleppo province.

The Aleppo Press Centre, run by a network of anti-regime activists, said children, women and elderly people were among the victims.

“Twenty-three other people have not been identified because their bodies were too badly burnt,” it said.

“You can keep your non-lethal arms. We will make weapons with our own hands. Either we die, or we win,” read a banner carried by demonstrators in Habit, a town in the rebel province of Idlib bordering Turkey.

The opposition and outgunned rebels have repeatedly urged world powers to arm them, but the West fears that the weapons will fall into the hands of Islamic extremists also battling Assad’s regime.

The Syrian Observatory for Human Rights said violence across the country killed at least 86 people on Friday people, including 41 civilians, 29 rebels and 16 soldiers.

The Red Cross said dozens of people were dying every day because of limited access to proper health care and shortages of essential medical supplies.