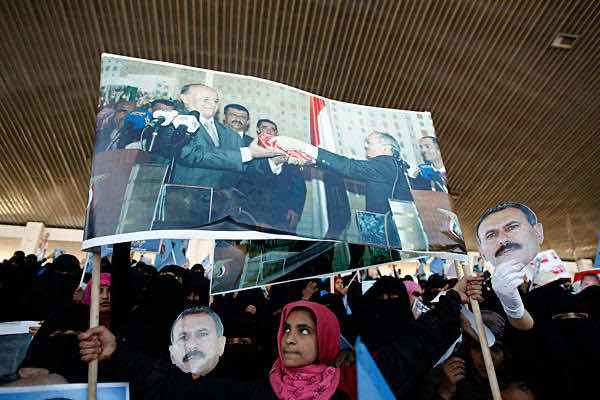 I had the experience of attending the festival that was held on February 27 by the PGC party (The Public General Congregation) on the anniversary of the peaceful process of submitting the authority of Yemen to the new president Abd Rabu Mansour Hadi that ended the presidency of Ali Abdullah Saleh, the head of the PGC party. It might be hard to be purely neutral when speaking about the huge gathering of hundreds of thousands if not really exceeding one million people who came only from the provinces close to the capital Sanaa (seven of the country’s 21 provinces) while other provinces were asked not to attend due to the low capacity of transportation.

The festival was meant also to thank the ex-president on doing his best since his stepping down from power, exactly one year earlier, to make the country as safe as possible especially with the many troubles that the last two years have brought in the name of the ‘Arab Spring’. Nevertheless, I will not be biased by the PGC ideology though I am a member of it. This festival had within its agenda several universal messages as well as UN principles that show that the PGC is still the strongest advocate in the country and most capable of winning any future elections. Also, it shows that the ex-president still enjoys the same publicity and support of all followers and supporters of the PGC despite a deep desire that Saleh should continue being the leader of the PGC; though this may bring chances for other parties to make troubles between him and his first deputy of the PGC who is the current president of Yemen.

The festival directed a special message to Jamal Benomar, the UN envoy, that the PGC refuses any kind of interference in the affairs of the party by any external actor and that Ali Abdullah Saleh won’t be an easy prey for any tricks that might be done by other parties or countries (e.g Iran, Turkey, and Qatar), which may try to support parties that conform to their ideologies (political or religious). Another message, that was somewhat embarrassing for other parties and for so many people in the world, is that the ex-president should lead the PGC’s chosen members in the coming national negotiations. The number of people gathered in El-Sabaiin Square was striking and very troubling to the media that did not expect that the PGC and the ex-president still have such enormous popularity in Yemen. The underlying message conveyed by this festival was that Saleh is still as strong as in when he held the presidency of Yemen and the so-called revolution was not more than an attempt by other parties to gain the authority through aggrandizing the idea of revolution for international opinion.

Consequently, such a great gathering had its effect on the other parties, mainly the brethren Reform Gathering party who tried to organize a strike the next day on Thursday the 28th. Frankly speaking, Yemen has passed enough time of pain, and the prejudices of its political parties have started being very troublesome to all Yemen. No one likes to admit it and even certain realities are neglected in order to prove the truthfulness of the revolution or to prove that public power is still in the hands of the ones who own it.

The ex-president Ali Abdullah Saleh, called in the festival for peace, love and reconciliation. There is only one way to stop such prejudice; Saleh’s words of peace must be taken into consideration. Otherwise, the unity of Yemen could be destroyed and broken up into not only two countries but rather many parts. The game of people gathering from all sides may be disturbing, but I believe it is good enough to establish a kind of political balance and readiness for sitting logically at the table of negotiations without neglecting other opinions that would help maintain our unity and integrity as one strong Yemen.