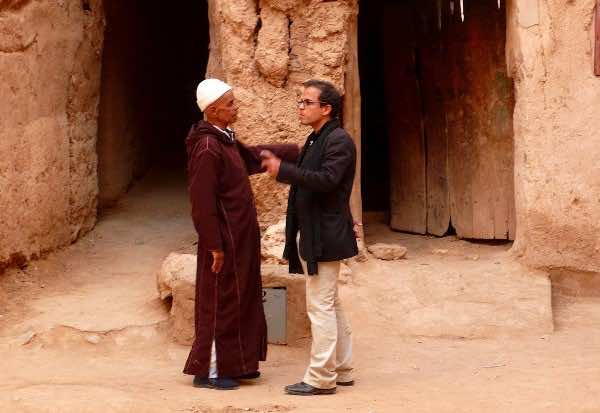 “I believe that the return [to Morocco] may almost be possible. There will be no Judeo-Berber cities as those which were in Morocco.” With such an announcement, the documentary Tinghir-Jerusalem: the Echoes of Mellah (Tinghir-Jérusalem, les échos du Mellah) by Kamal Hachkar is summarized. It continues: “Yet, in Israel, my encounters convinced me that it is possible to recreate connections despite this long rupture and that we can revive this pluralistic Morocco together.’’

Hachkar’s film is 87 minutes long and is a co-production of Les Films d’un Jour and the Moroccan TV channel 2M. It sheds light on controversial questions such as those related to the Jewish diaspora and exile. As any careful viewer would point out, the film is based on anecdotes and hearsay that the main speaker keeps repeating every now and then, “I heard when I was young’’. Of course, this cannot be practical for a documentary based on historical content. However, first and foremost, two underlying motivating factors for the making of the documentary are: the desire to attain full normalization with Israel and the search for a geography where diaspora Jews may settle. If this last issue of settlement is itself unsettled among Jews, how do Jews in diaspora living in others’ lands define themselves and how does the Moroccan government deal with the issue?

It needs a context to start. Neturei Karta Organisation, literally standing for “Guardians of the City,” is a Jewish fraction which was created in Jerusalem, in 1938 and is known for its fierce opposition to the creation of the state of Israel in Palestine. It seeks with gusto to dismantle Israel, considering it as illegal. Broadly speaking, Neturei Karta rigorously opposes any formation of a Jewish state on the land of Arabs, be it in Palestine or elsewhere. Worth noting, the stance the organization has taken is fed by the determination to debunk the alleged credibility of Zionism, divulge the unlawfulness of Zionist claims and disclose the real hidden agendas of this ideology that pass under the table. In its belief, the Zionist movement, which was brought into being by figures such as Theodor Herzl, works day in and day out worldwide looking for “a land without a people’’ for a people without land.

In opposition to that, the spiritual and cultural orientations of the aforementioned anti-Zionist organization are part of a whole set of principles held by the most orthodox Jewish sect labeled Haredi Jews dispersed around the globe. This position is based on the teachings of Judaic scriptures, which state that Jews are destined to live in exile owing to their sins. Such a religious basis begot the organization’s political attachment to the concept of diaspora as a natural fate of Jews over the world. The organization’s members go further to deem any Jewish claim to own a state with borders as a violation of divine will.

Most controversially, a revision of Judaic and Rabbinic literature unveils the fact that any act of settlement by Jews is to be by nature fanatic and exclusive. That is because one of the convictions rooted in the mindscape of a Jew is that Gentiles are impure and their presence would spoil the “sacredness’’ of the Jewish “chosen’’ self.  The Talmud is strict about it to the letter that any Jew who lives among the Gentiles is considered as “one who has no God” (Babylonian Talmud, Ketubot 110b). Gentiles are “heathens’’ to be excluded, ghettoized, and placed in a position of marginal importance. This ideological background explains why the neo-Apartheid system is functioning now against Palestinians. The term “Apartheid’’ here is borrowed from the book Palestine: Peace not Apartheid by former U.S president Jimmy Carter. It is noteworthy that even Carter’s outlook in the book was severely opposed by the Zionist movement worldwide. That is because Gentiles in the Jewish mindset are to serve the presence of the Jewish Master and are to remain like the ‘‘madwoman in the attic’’ to use the analogy from Charlotte Brontë’s Jane Eyre.

Such underlying spiritual and ideological principles that Jews embrace construct a typical radical Jewish egocentrism that awards legitimacy to any violation of human rights against the Gentiles. The International League Against Racism and Anti-Semitism, or Ligue Internationale Contre le Racisme et l’Antisémitisme (LICRA) in French, stands as a shield against any suspicion of Jewish violation of international law and human rights. The 1990 Fabius-Gayssot law, or Gayssot law, in France for instance announces that “any discrimination founded on membership or non-membership of an ethnic group, a nation, a race or a religion is prohibited.” The exploitation of this statement gave strategic privilege to Jews that anybody studying the Jewish case seriously could face either a fine up to 45,000 Euros or a prison sentence up to one year.

Concrete illustrations are needed for this. The trial that the French philosopher Roger Garaudy went through after having uncovered facts about the Zionist agenda and practice is one of the forms of discrimination against the intellectual body embarking on objective studies of Jews and is at the same time a form of the severe punishments this body may “deserve.’’ Roger Garaudy prefers to call such a practice “political superstition’’ in the introduction for his book La Mafia Juive: Traite des Blanches. Second, the Jewish American intellectual and academic Norman Finkelstein is another example of the discrimination that anybody who suspects Zionist violations of others’ rights would face. Mr. Finkelstein was banned from entering Israel for 10 years and was also refused tenure at DePaul University in Chicago for attacking several academics who promote Zionist agendas such as Harvard law professor Alan Dershowitz. Such “sacredness’’ that Jews and Zionists are endowed with is the natural result of unfounded controversial laws and organizations as the ones mentioned above.

In this regard, the Moroccan government led by Abdlillah Benkirane is challenged with such forces that own the right to accuse any unwanted figure of “anti-Semitism.’’ One of the ironies of the term is that Muslims are not encompassed by the term “Semitic’’ as if they were not of Semitic origin and of Abrahamic faith too. Such a pressure compelled the head of the contemporary government to attend the funeral of the Secretary General of the Foundation of Jewish-Moroccan Cultural Heritage Simon Levy in person. This was read as a sign of tolerance and recognition. Sometime after that, Abdlillah Benkirane was reported missing in the funeral of Abdessalam Yassin, the leader of Al Adl Wa Al Ihssane (Justice and Charity) movement. Those signs of tolerance and recognition of the other that were cordially shown once with Simon Levy suddenly vanished.  As time passed by, Abdlillah Benkirane appeared again in person celebrating the inauguration of “Salat Elfasseyin’’ Synagogue in Fes. Again, the signs of tolerance and recognition which disappeared for some time boldly appeared anew in that event.

Inharmoniously, the documentary with which this article began was boycotted by the PJD (Justice and Development Party) members when it was played in the International Film Festival in Tangiers. Sometime after the boycott, Tinguir Jerusalem, which is an explicit daring form of Zionist propaganda, appeared on 2M during the PJD presidency with Mr. Mustapha El Khalfi as the minister of Communications to address Moroccans who do fund the channel, first, and to break the neck of those who did not accept it in the international film festival, second. More controversially, the film was addressed to the Moroccan audience knowing that this audience is anti-Zionist and regularly condemns any atrocity organized by Zionist apparatuses.

To bring this labyrinth-like journey to a close, the following comparison sounds too legitimate. British Member of Parliament George Galloway wrote on his personal Facebook page on Thursday, 21 January that he refused to debate with an Israeli at Oxford University, since “if they want to speak about Palestine, the address is Palestine Liberation Organization (PLO).’’ The questions that present themselves here from start to finish are the following:  If Mr. Galloway boycotted Zionists since he already knew that he, as well as any Palestinian or non-Jew, is only a Gentile in the eyes of Israelis and Zionists worldwide, did Mr. Benkirane understand that too? Or shall he?

Mohammed Zeriouh is co-editor of the International Cinematic E-Magazine and a third-year PhD student in the doctoral unit of “Languages, Cultures and Communication” at the faculty of letters, Mohammed 1 University, Oujda, Morocco.