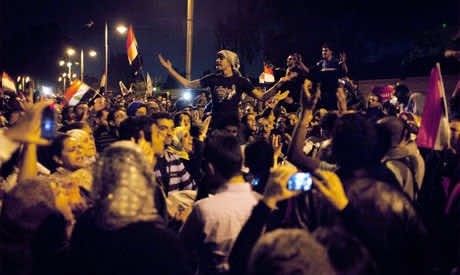 Egyptian protesters torched a police station in Port Said on Saturday as US Secretary of State John Kerry landed in Cairo
to push for a way out of the country’s political impasse.

The interior ministry said about 500 protesters threw stones and petrol bombs at the police station, setting it on fire, and then blocked fire engines from reaching the blaze.

The protesters had gathered outside the station after two men were injured when a police truck hit them during earlier clashes in the city, now entering its third week of a general strike, the ministry said.

Meanwhile, one person was killed and dozens injured in overnight clashes between police and protesters in the Nile delta city of Mansura, a security official told AFP.

According to media reports, the protester died after he was run over by a police van.

Regular clashes have been taking place across Egypt amid a stalemate between Islamist President Mohamed Morsi and his secular-leaning opposition ahead of parliamentary elections next month.

But two main opposition leaders, Hamdeen Sabahi and Mohamed ElBaradei, have turned down meetings with Kerry in protest over Washington’s call on the dissidents to reconsider their boycott of the parliamentary election.