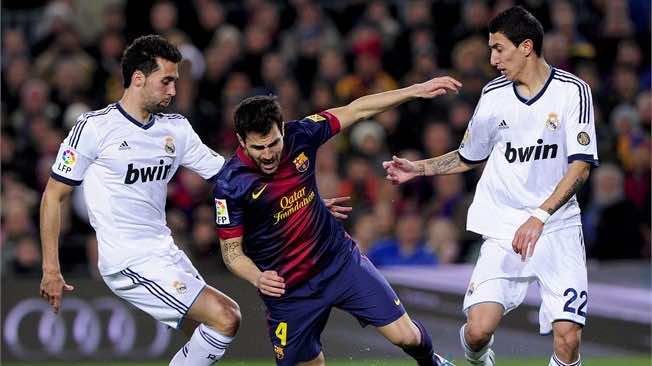 After the semi-finals of the Copa del Rey when real Madrid stunned F.C Barcelona in the Camp Neu, the Madridistas succeeded in defeating Messi’s teammates on Saturday at the Santiago Bernabeu stadium.

The first half of the fourth Classico of the season between Real Madrid and Barcelona at the Bernabéu stadium ended with a draw score 1-1.

The whites were the first to reach Barcelona’s goalkeeper when the Frenchman Karim Benzema followed a cross assisted by Morata to put it in the center of the goal at the 6th minute.

Real Madrid with almost all its stars on the bench, including the Portuguese Cristiano Ronaldo, as the team is expecting a decisive match next Tuesday against Manchester United at the Old Trafford, continued its attempts on the Catalans to widen the difference before halftime.

Barcelona’s super star Leo Messi however had other thoughts as he translated a through ball from Dani Alves into a goal in the bottom right corner at the 18th minute.

Although F.C Barcelona possessed the ball for most of the game, especially during the first half, it was to no avail. Once again, Real Madrid showed itself to be more realistic.

Los Blancos’ manager, José Morinho, who left Ronaldo in the bunch in the first half, decided otherwise in the second half as he saw his team struggling to keep the lead.

Cristiano Ronaldo replaced Benzema and added more pressure to the forward line with different attempts to reassure a second win over Barça in less than a week.

Barcelona’s assistant manager Jordi Rora in his turn made two substitutions as Alexis replaced Villa and Adriano filled in for Pedro.

The locals’ efforts paid off as Sergio Ramos received a cross following a corner from Luka Modric and put it with his head into the top right corner at 82nd minute.

Real Madrid managed to add extra goals and gain more momentum before the match against Manchester United next week with an outside-the-Box direct free-kick by Cristiano Ronaldo hits the right post just two minutes before the end of the match.

Barça demanded a controversial penalty in the last minutes, but the referee Miguel Angel Perez Lasa rejected their grievance and announced, seconds later, the end of the match and a second consecutive win for Real Madrid.

It is the first time since 2008 that Real Madrid beats its legendary rival in the Santiago Bennabeu stadium.

This result marks Barcelona’s second defeat in the Spanish Liga after their first defeat against Real Sociedad on January 19.