Morocco World News
Home Middle-East Egypt Egypt economy must ‘get back on its feet’: Kerry 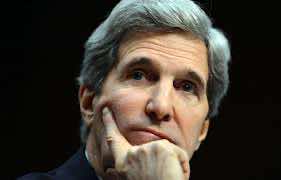 US Secretary of State John Kerry said on Saturday that Egypt’s crumbling economy must “get back on its feet,” while on a visit to Cairo aimed at pressing deeply divided parties to reach a political consensus.

“It is paramount, essential, urgent that the Egyptian economy gets stronger, that it gets back on its feet,” Kerry told a meeting of business leaders.

“It is clear to us that the IMF arrangement needs to be reached. So we need to give the marketplace the confidence,” he said. A deal for a $4.8-billion loan from the International Monetary Fund was agreed in November, but it was delayed amid political unrest.

Egyptian officials have said they will continue talks with the IMF in a bid to reach an agreement, which could unlock other pledges of aid for Egypt’s battered economy.